The main thrust being as articulated by one parliamentary Leftist grandee;

To be successful in politics, you have to ride two political horses simultaneously. Rishi has done a budget for the hour and made the possibility of long-term prosperity to fight the next election. Best budget in my 42 years in politics. #Budget2021

One such antagonistic deep-Left reporter with no normal sense of balance hailed this graph as the best question poser from the post-match press conference segment shown up top. 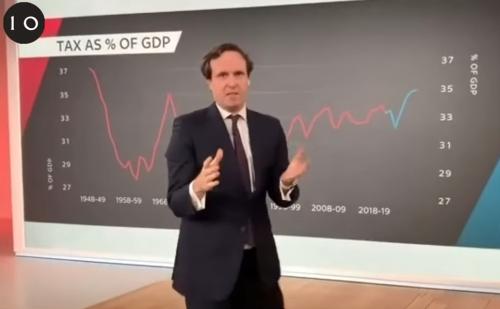 “… use of the tax burden chart in his question … was a stroke of total geek genius. I am in awe.”

In the context of the typical barcharts comparing previous estimates with new ones and future projection, this was a definite change-up in presentation.

A reminder to not shy away from thinking of a different dataset or perspective that neither your prospect nor any other competitor may have thought of showing.

Then you can also both steal the headline and shape your way the aftermath of an event.