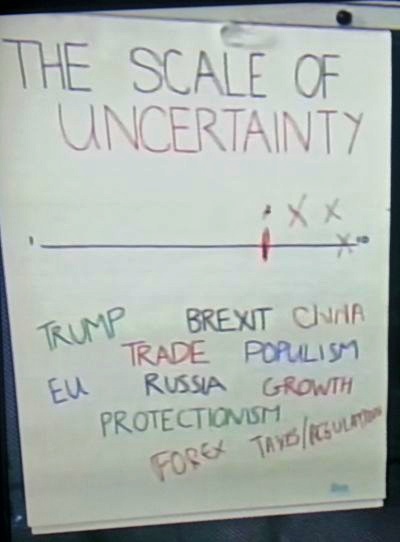 Another year at Davos, another Richard Quest flipchart. Risk Map, Worry Wall and for 2017, his Scale of Uncertainty.

As Quest himself notes;

“[of the 400 sessions] there is one panel missing from the WEF agenda — an admission that “we are out of touch” and “we didn’t see this coming.” What WEF won’t admit is that core Davos Delegates represent the very values being rejected at ballot boxes — and those same delegates failed to see that rejection coming.”

So it was a little puzzling that – as seen above – he continued last year’s line theme, nought to ten, for uncertainty. Why not ‘what most can’t see coming’ or ‘our next rejection’ or a ‘scale of shock’, plotting 2017 against the supposed seisms of 2016?

Any, back to his axis. Although the reason for the red hatch-mark two-thirds along wasn’t divulged, it did act as an influencer. Interesting to adapt for our selling needs…

Richard had also kindly written up a number of uncertainties beforehand. He asked each Davos sleb to add one if they wished. An invitation all but one took up. Everyone desperate to be seen as clever, important, worthy.

Then they could pick a colour to daub where on the scale they lay; red or green.

Let’s take as an example Rich Lesser. CEO of Boston Consulting. Although quite how after hearing him pontificate is anyone’s guess.

He duly added his obligatory extra uncertainty; tax and regulations.

He nabbed the red pen to add small, slanty, full words. Without once glancing at Mr Quest.

In fact, his entire performance at the flipchart was the opposite of textbook.

In general, there was shamefully little encircling, underlining, memorable annotating, or use of the other (green) marker pen

A ranty union rep was the first person to underline. When unsurprisingly he added the uncertainty of ‘Jobs’. Later an Oxfam lady joined him in striking lines, also under Jobs as wells as Populism. As an aside, she hails from the organisation that created the way way best pre-shindig pr.

The 8 richest men on the planet having more wealth than the entire poorest 3.6bn half of humanity combined.

It ruled the pre-WEF airwaves. If only you could frame your client’s issue in such a high impact manner.

Then think about ‘x’ marks the spot. Why an ‘x’ though? Why did everyone default to one? The bright sparks that eventually populated the left-hand of the scale could’ve shined further if chosen an alt piece of symbol-ogy.

In mostly red too? (One guy said green citing his alma mater’s colours). Where’s the free (real) thinking among the self-appointed elite?

As you can see by the end of Night Two the page was buzzing. 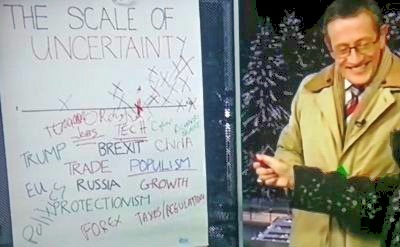 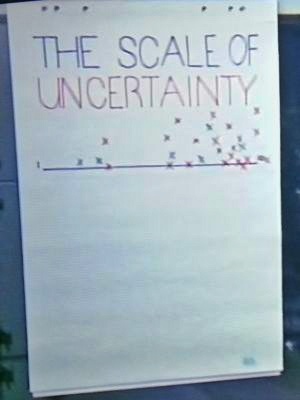 If only the show wasn’t cut (to make way for American inauguration nonsense) we might have seen something special emerge. Maybe next year…