I remember my old junior school dinners fondly. The food was rather good, even if the supervision was not. We sat at octagonal tables and often played a game we called ‘chinese whispers’. I’ve since been told this was named so possibly as a result of the vast distances messages had to travel back across such an unnecessarily large country. And I was intrigued to find the same game apparently has another name too, ‘broken telephone’.

The game starts with someone whispering something to the person next to them. Close to the ear, with cupped hand masking any sound leakage.

The content would often be something jokingly teasing about a fellow diner.

Everyone repeated this in turn until the eighth person. They would then say out loud the message.

And as you can probably guess, the message was never the same as the one that’d started out.

In just eight people, it normally changed out of all recognition.

And this is the same thing that happens in selling.

It occurs in two respects.

You must constantly repeat messages, over and over, to salespeople. Especially about new pitches, products and selling collateral. If they only hear it once, salespeople will not regurgitate it correctly when required.

One example I witnessed with my own ears recently was with a rep pitching me that his company boasted;

When the reality – one presented at a new-year-kick-off meeting just the very day before – was startlingly different;

A sizeable discrepancy, and one prospects could easily pick up on in negative light if amplified even farther on other aspects of the bid.

Imagine you pass on a nugget to a person inside a prospect. You want them to use it and spread the word around their organisation. What chance do you now think they have of getting something potentially so prone to mis-quoting correct?

Give them a slide with the fact emblazoned large on it, write it in a tweet-sized soundbite, leave them a message that is just the now-standard tv news 7secs long, or better still, ensure you’re permitted to pass it on yourself, without recourse for a messenger.

As a post-script I did a cool short item on this as a conference-break ‘game’ recently. It works a treat to help hone a key new message.

I invoked the daddy of memes, Richard Dawkins. One of the essential qualities he believes something must have to be accurately passed on (often in today’s terms equating to ‘going viral’) is “copying fidelity”. A message that can be passed on without alteration is what you’re after. 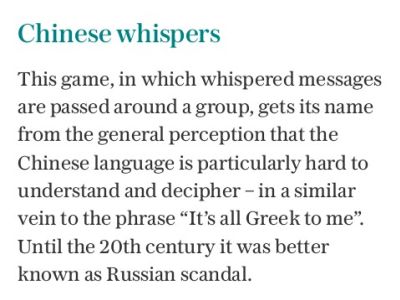