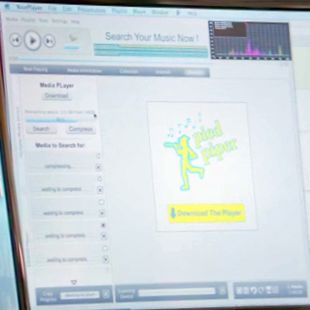 our only glimpse of the embryonic startup app landing page interface

If you’re unfamiliar with the premise, introvert coder Richard spends his spare time outside working for a tech giant trying to develop an app of his own. He calls it Pied Piper. He thinks of it as solving a particular niche problem. Whereas investors see a game-changing gem hidden inside.

Before he reaches that exalted stage of programmer dreams, the bidding war, we see him deliver his pitch.

Our first encounter of it is hearing how he persuaded an incubator to back him for his “google of music”. Hardly the “rad” label it might have seemed. Here’s how Richard first tells us what his baby does;

Pied Piper will be able to search the whole world of recorded music to find out if there’s a match to see if you’re infringing on any copyrighted material, so if you’re a songwriter or a band, …

Before his ‘backer’ cuts him off. Later, with his plans in tatters, he buttonholes a billionaire leaving his own Ted talk;

Pied Piper is a proprietary site that let’s you know if your music is infringing on any existing copyrights, so imagine you’re a songwriter okay….

He’s cut off again, this time by distraction and then their Assistant; “…it sounds like it would take incredible processing power”, she says. “Yes, yes it does” the billionaire agrees leading Richard to protest as they walk away, “no, no I’ve made an algorithm…” But off they disappear, unsold.

And an award winning showrun begins.

So what of the founder’s initial pitch?

It’s meant to be, if not “wrong”, then certainly for the purpose of dramatic set up, “misfiring”.

Yet the key element is (almost) there.

My immediate thought was of the why-what-how “golden circle” method.

Here, the ‘why’ must come first and is that no songwriter will ever get themselves in trouble for using someone else’s tune again.

The ‘what’ is pretty much that first line of his initial stab.

As for the ‘how’, like saying it’s “proprietary”, well, definitely best left unsaid completely at this stage.

Luck makes its generous intervention meaning Richard’s app is salivated over for what’s under the bonnet and a bidding war erupts. Whilst there’s never a dodgy pitch when the funds flow, best we don’t resort to hope of a magical break when pitching our new product.

as a footnote, I also loved the portrayal of Richard’s pitch to the intolerant, disinterested tech billionaire – note how the pitcher’s eyes were closed for a long while as he got going, desperate to recite how he’d perhaps rehearsed it in his mind; 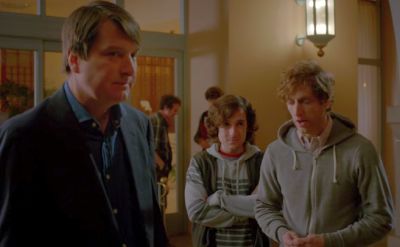