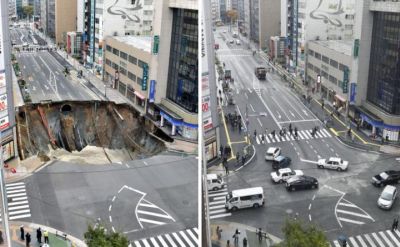 The above pic whizzes around the web as I tap.

It’s a story that you simply have to use in as many a prez as you can between now and the end of the year.

Here’s the story. The city of Fukuoka subway works possibly caused an “unprecedented” sinkhole. Across this nearby five-lane roadway. 30 meters by 15, it was huge. Causing damage to utility pipelines and exposing adjacent building foundations.

Just 48-hours later it was all fixed. Following a pause for rain then final safety checks, the whole road was open again inside a week.

Don’t you sell an equally fast turnaround? A suitably extra-reinforcing strength? Your own proven plan for delivering the required wet cement and sand that fills its unwelcome crater?

I know it works wonders because back in 2011 I experienced using this exact kind with marvellous results.

A tsunami from the Great Sendai Earthquake hit the Fukushima nuclear plant. In its wake there were also prominent pictures of earth shifting traumas. A main expressway tore apart was repaired in an astonishing six days.

The power of this before-and-after treatment meant my message truly sunk in.

I deployed for both external and internal. A hit all ways. A simple sales-newsjack of your own to gain progress.