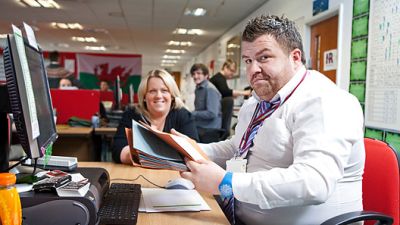 I did enjoy the four hours of fly-on-the-wall mayhem from Swansea’s third largest call centre. Those with access to BBC’s iplayer can catch up just now.

In the final hour, team leader Johnny was managing his sister Gemma. Fireworks were a given.

Usually a top performer, it seemed she was what the Americans call ‘hockey-sticking’. No sales early doors, then as the sales period-end loomed a sudden surge as she scrambled to get results. “Monday, Tuesday, mediocre. Wednesday picks up. Then chase hard Thursday, Friday.” Johnny termed this an end-of-week “uptick”.

Frustrated, he turned to the owner for advice. Nev’s solution was instant, “double points on a Monday”.

With one idea gained, Johnny then went to give her some training. Cue effing and blinding so beloved of reality telly.

His diagnosis and prescription were rapidly delivered.

You’re not involving the customer.

Add words to get them involved.

He remarkably gave the analogy of this encouragement for the prospect to speak being like a footballer setting up a goal with a killer pass. Again cue utter disinterest on his sister’s face for cutting room glory.

You have to wonder how he could recommend asking questions of the prospect, without asking any of his sister during this exchange to elicit her ‘involvement’.

Still, extra incentives for slack times and not droning on like an automated call directing system’s voice are steps in the right direction.

Fans of this show, note I’ve written other blogs on Nev’s Call Centre selling insights – focusing on shift manager Dwayne’s pitching and visualisation, and the winner of voice of the year.