The Shard. A wonderful new addition to the London skyline in one of my favourite parts of town.

It houses a hotel with lofty ambitions. As well as having the highest bar view across the capital, the Shangri-La global chain aim to have London’s Number One luxury hotel. And it make the Top Five across the globe.

A documentary lit up how the year-delayed launch went.

There were surprising occasional selling insights.

Like how the waitrons must banish any informal conversational padding (‘flickwort’-esque) negativity. “No problem” is out. “Yes, sure” is in. 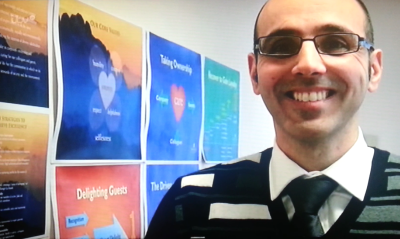 Then we come across ‘Moon’. Pleased with his new jumper. If that’s not how his name is spelled, it’s certainly how it sounds.

He is the global training manager.

And boy does he fit the stereotype.

All the sincerity of an American game show host, with misplaced enthusiasm to match.

He thinks it’s acceptable to try and get the room of trainees to sing along to a company song.

Even The Call Centre’s Nev will scoff at that…then play The Killers on volume 11 to himself.

Everything about the ‘song’ is not right. From its poor jingle production to its messaging.

I’m reminded of a one-time friend that insisted the Wal-Mart morning ritual of company anthem recital was uplifting.

Mind you, I have sat with colleagues in the juicer happily making up a company song of my own. But then, the English uniquely get irony.

So our Moon has these (at least) seven slides printed off on his wall.

From Key Strategies To Achieve Excellence to Our Core Values to Delighting Guests to Taking Ownership.

There seems to be some kind of corporate screen wallpaper. Straight out of the flawed ‘successorize’ stable. A yellowing dusk shot of a craggy mountaintop.

Standard powerpoint shapes are fine, yet here they’re used with little imagination. Or indeed, design literacy. As much as I like the heart shape, it can push a business slide into the cringezone.

It all seems just too generic. Indistinct. Untailored. Which when coupled with typically vacuous corporate diktats slay any message.

Which is surprising. Not only given the brand’s goals, but also that they must have considerable design expertise somewhere inside the corporation.

Possibly most startling, when you realise the shape of the iconic building in which they proudly sit.

Here’s a photo I took on a crisp Autumnal day. From the ground floor corner where you enter the Shangri-La.

I couldn’t help but think on all those skyline slides I’ve laboured over in the past. There are downloadable options for sure, but it is usually better to pick a couple of the best structures on pictures and create the shape of them yourself. This also goes for Borough’s Shard. Here I was inspired by a graphic design image I saw.

Not only that, but when I was near the Shard myself, I couldn’t help be struck by the imagery the building uses for itself. I’ve also replicated that here, using the Shangri-La corporate gold.

Although the left one took me an entire listening length of an album.

Mainly because I began with the wrong geometry. Then thought I could amend as I went. Only to surrender late in the piece and re-start afresh.

I can naturally understand if the hoteliers prefer not to use someone else’s logo.

A caricature would still make a terrific image to build your hearts alongside (if you insist on them). Or even have five in a row with your chosen words emblazoned inside. (In Shangri-La’s case their stated values are; respect, humility, courtesy, helpfulness & sincerity). And linger way sweeter in the memory than any stock photo summit shot.

With just a little imagination from a different slant, both your message and imagery can be made to better stick.

…now, if only we could do some work on those ‘values‘… 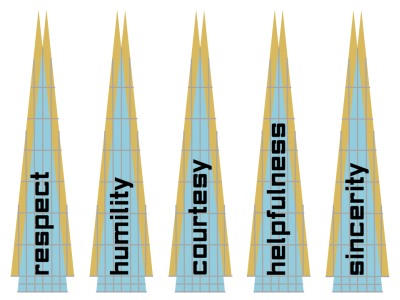