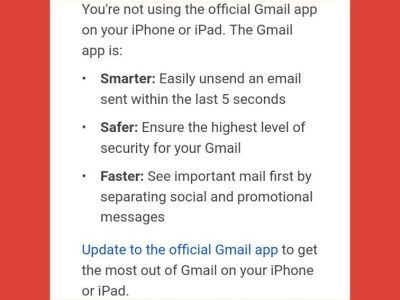 Here’s a little piece of expensive pitching I just got shown. The latest push in Google’s masterplan to own as much of you as possible. It sees them trying to move their non-Android mobile mail users off the general Apple app and onto their own dedicated one.

Well, they try to give you a trio of compelling reasons. Wrapped up in the bare tricolon; smarter safer faster.

Not the snappiest of these kinds of slogans ever heard. Yet the structure is a winner.

I’ve blogged before many times on this ‘power of threes‘ construct.

Here’s a random piece of wiki around this;

The Olympic motto is the hendiatris Citius, Altius, Fortius, which is Latin for “Faster, Higher, Stronger”

A page which suggests others most quoted as the Julius Caeser “veni, vidi, vici” of ‘I came, I saw, I conquered’ fame and the French Revolution’s republic values of “Liberté, Égalité, Fraternité”.

It works. They stick. We can all use it more when selling.

Yet they are notoriously tricky to pull off.

One danger is the generic nature of a superlative. What wonder-product is not going to pitched as a “better” one? Which would ever not give a buyer an improvement of either the “more” or “less” variety? When would an attractive improved benefit not have an ending “-er” added to it?

Another is if the ‘extra’ is of (at best) disputed relevance.

Not forgetting the issue of merely repeating (or countering) what your competitors claim.

Still. If Google think this is the way to tempt you “to get the most out of” their services, perhaps we can to.