In the world’s eldest industrial city I came across two entertaining pieces of retail sales craft. Or not.

Searching out a party drink, I perused first a boutique wine shop. The sole staffer at Connolly’s informed me they were quite the Burgundy specialist. Which seemed all rather convenient, as I was after a light and easy red of that ilk.

Upon recommending a particular bottle, he thrust it into my hands. I recognised the trick approvingly.

Whenever you have a physical product, to get the prospect nursing it in their palm is always a winner. I suspect psychology suggests it removes a significant barrier. One early notice of this came many years ago when observing people manning those temporary stands at motorway services. They invariably pass their potential client their credit, phone or car breakdown card.

I wondered the extent to which he was conscious of this tactic. So I tested him. I tried to pass it back. He was having one of it. He swiftly moved to another option. So I put it down. In the wrong place. He swooped so smoothly it was the helpless fieldmouse to his elegant barn owl.

This is tricky to replicate in b2b circles, granted. What with our long buying cycles and often intangible wares. Yet there’s plenty in trying to get the prospect comfortable ‘holding’ our goods.

A cheeky pinot later, I landed in the town’s only whisky store. I also had something in mind here, this time even more specific. I was greeted at the door, so asked straight away. “Have you Stranahan’s?”

Any fan of House Of Lies will know that if it’s good enough for Marty Kaan, it’s good enough for me. And Stranahan appears his choice of house whisky. I do love my single malts. And for quaffing there’s the trusted Jameson triple distilled blend. But I’m open to trying the new. Even if it is from Colorado. And was curious to buy …if only typing #stranahans could miracle me a sample my way…!

The shopkeeper was audibly incredulous. “Never heard of it.”

“Well, it is American” I ventured.

“We’re a Scottish specialist. The American is over there.”

He pointed to a shelf. As if his nose was being pulled by a puppeteer’s string from the ceiling. And that was that.

Wow. How to lose a sale. Not just today. But every tomorrow too.

Just imagine the potential glorious conversation that could have followed even just a tiny inquisitive movement from the server.

Instead, he has nothing. No knowledge. No goodwill. And certainly No customer.

He probably chuckled mockingly to the other punter in the shop after I departed.

I left frustratingly mulling over several forms of words he should have rather uttered.

This second interaction has more obvious transmission into our b2b world.

When you’re asked about something new to you, do not be dismissive.

Be curious. Investigate. Show interest. Expand your horizons. You never know where it might lead.

How you come across that? What’s the story there? Sounds interesting, tell me more…

I seethed at how just one bottle of Stranahan’s could provide so many conversation starters for that misguided vendor. How he might miss one whisky reference from current popular culture is perhaps understandable. Just. But when I stopped to think of all the other such references that quickly came to mind, I was livid. I could see the shelf label it in front of me. “Hollywood Whisky”.

I also knew of the Macallan preference of James Bond thanks to Skyfall. And I once caught David McCullum, who plays pathologist ‘Ducky’ Mallard on long-running US crime filler NCIS, with his pristine lab desk proudly sporting a cheeky bottle of 12-year old Laphroaig no less.

A simple surf quickly threw all sorts of opportunities this way. Like Glenlivet as gulped by Dudley Moore’s Arthur. And that 007 also enjoys Suntory and Talisker. (There’s even a site called boozemovies…)

What a wasted chance. Don’t miss yours. 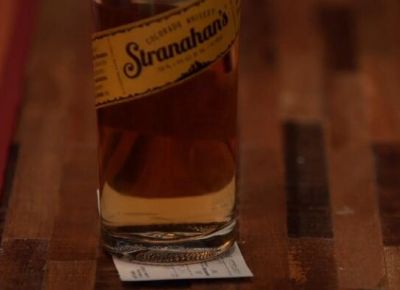