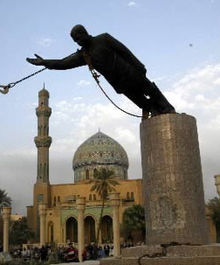 Here’s a phrase I’ve heard a lot of this week on news bulletins. As Libya teeters on the verge of Gaddafi being toppled, what no-one wants is the kind of devastating chaos seen in post-Saddam Iraq. All onlookers appear nervous that carnage could ensue with a (seemingly possible) swift departure of the tyrant.

An event or product that attracts so much interest and attention that it exceeds its own sustaining capacity, resulting in the inability of the organization to respond to demand.

Mine is a blog for salespeople with CEO material, so helpfully, ohlms illustrates with an example;

The new product was such a hit that the store ran out, resulting in angry crowds destroying the mall. It was a catastrophic success for the company.

Also suggested by way of similarity, are links to (among others) ‘catastrophic failure‘,  ‘failtacular‘ and ‘phyrric victory‘.

A recent book, written I think mainly at brand managers, posited that this kind of thing was one of the five main reasons why new products fail.

Take the above store analogy further. What’s the point of selling your new solution if implementation becomes a disaster? Or if you simply can’t make your new wares work?

Whenever embarking on any new endeavour, avoid giving in to those that joke with lines like “it’d be a nice problem to have” when you mention planning for avoiding over-delivery. It is a career-ending problem. Plan to avoid it.