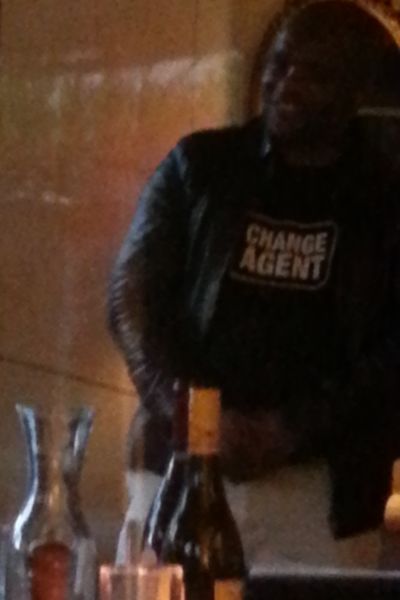 I heard a fascinating first-hand account of how an entire, mature and change-averse industry got to accept a change. You can’t help but like his t-shirt above (despite my blurry long-distance pic from the event).

An Eastern Cape African got to study on scholarship at American Uni, in Austin. Immersing himself in the foodie culture he gleefully found there, he was then alarmed once returned home that the meat quality was so inferior. Bland was the one word he regularly used.

It seemed that the key hurdle was the entrenched, misguided grading system. It was based on the age of the beast, rather than tenderness or tastiness of the meat. He set out about to turn this around.

for change to happen somebody has to do something different.

Yes. But how to find that elusive someone and something…

He continued his tale with years’ worth of meetings, transactions and knockbacks. Before he recounted his own personal ‘5 Cs of change’;

I love this kind of stuff. And have blogged on its power several times before.

A quick surf uncovered a remarkably similar five from Australia last year (pdf), in the shape of “The 5 C’s [sic] of Literacy and Literary Skills Development”. The irony of the grammar error is juicy, isn’t it…another one for the apostrophe police! Obviously the order’s different and Creativity is switched in for Context there.

The pictured ‘change agent’ gave detailed examples of each. Suffice to say ensuring actions and interactions for every one is vital.

Anyway, we as solution sellers are all pursuing the green light for change. How well covered are these five on those live, forecasted deals…?