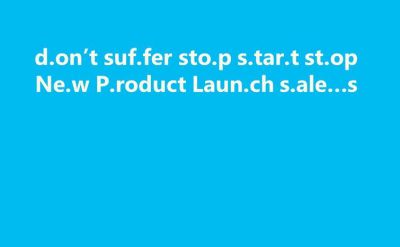 For my 2017 solo endeavour I deliberately crafted a (supposedly) snappy response to that most innocent yet devilish question; “…so what d’you do, then?”

In the style of multitudes of workshops I’ve ran for eager salesteams these past two decades (& have frequently blogged on before, as well as aligned tactics too) I chose a response using the seven-word format. I pretty much use the first words that came into my head.

Self-criticism leads me to feel this isn’t quite “it”. Yet as it provides the required outcome – namely a conversation with the asker going on to enquire further with interest – I’ve not sought to amend. So far.

Then prompted by a number of posts on the subject of succinct pitching recently, my thoughts turned to the three-worder (a tridiom, perhaps?!).

Ought I have a ready-made, shorter, snazzier answer?

Could I nail this one?

I opted for the ‘expression’, rather than trio of ‘values’.

Swift self-brainstorming began generally, progressing to more focused ideas. Which hopefully led to the better specific statements I wanted. Suited to glimpsing the niche I aim to serve. Here’s a sextet selection;

I find most salespeople like this type of task. Never as easy as it might first sound. It makes them think in a refined manner. Neatly summing up tricky concepts to get across. And providing they adhere to the various health warnings, gives them a useful go-to motto.

Designed neither to replace corporate (marketing) sloganeering, nor cement a new mantra for tomorrow, it merely seeks to open prospect ears and minds to the problem you uniquely resolve, in a way that starts an engaged dialogue around it.

When helping sales leadership with their latest new product, one of the major reasons I find they welcome assistance is because they have personally launched before and always suspected there’s got to be better ways of doing so.

Marketing colleagues take it so far, then it’s down to them. And it’s that ongoing effort – all the while subject to distraction and deviation from all the other pressures a salesteam operates under – which requires attention that I can unravel.

In the spirit of the famous wisdom, “the first victim of war is _____” (there’s many an option to fill in that blank), I know that after a raft of prospect meetings, the development that throughout my career has ranged from kaizen to #failfast will ensure anything from a gentle evolution to a full-scale total change of my deployed strap.

At least though, I have my preferred statement – and crucially a second choice to also try as follow up. It takes just a few moments to create your starting point. Time to do so?