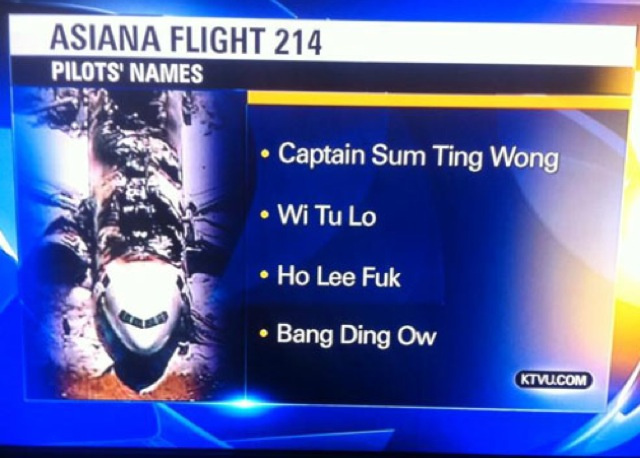 When a plane crashes one of the instant thoughts that can fly through you, is ‘eish, that could have been me’. So it was recently when a plane struck where tarmac meets sea at an airport I’ve landed at many times myself, SFO.

The story moved quickly. The miracle of survivors, the insistence on no mechanical failings, the tragedy of two teenage deaths – one possibly at the hands of being obscured by foam when an emergency vehicle ran over them – the evacuation stalling for 90 seconds.

What lay outside of this though, was captured in the screengrab above that was all over the web the following week. Local tv news output decided to share the names of the pilots they thought they’d got the scoop on. Read Gawker‘s take for how on earth this happened, and decide for yourself which side of the commentor fence you polarise; horrendous racism or laudable send-up.

I saw with interest reference to this type of telly graphic as a chyron. It turns out that this is a ‘generic‘. A brand name that becomes so synonymous with the product that all subsequent entrants in that market suffer from being labelled by the same umbrella term. This one appears to be pronounced ki-ron, and even has an accepted definition;

an electronically generated caption superimposed on a television or cinema screen

Naturally intrigued, I thought I’d surf for best-practice. I reckoned on this being fertile ground. Mainly because this must be the oldest piece of presentation software around, so winning tips must surely abound.

Yet it became another example of the battle between two commonly opposing forces seeing the more humble of the two win out. By this I mean that frequently in tech, stuff gets invented and exploited at the very top end. With the deep walleted huge corporates targeted. Then at the bottom end, the penny pinching consumers get a cobbled together version from a smaller player. A massive space opens up for the lucrative middle ground. Often, the product coming up from the grass roots seems to make the global killing. Which is a shame, as it would be neat if we all used the word chyron instead of powerpoint, don’t you think?!

Incredibly, I could only find one user group online (their main website was no longer operating) and the manufacturer themselves didn’t even own a public blog (just a load of useless social media pages of press release links and a newsletter that didn’t appear to be running). Crazy.

This frustration led me towards the fruits that is the google images search for ‘chyron bloopers’. Strangely, very little of any substance gets turned up by ‘chyron best practice’.

Anyway, it did strike me that the popular chyron framework could be a neat one to apply to a summary presentation slide.

You start by simply choosing an obvious corporate colour as main background, then slap a pic in the middle that gets across or represents what you’re about. Next, play around the edges. Maybe with a right-hand sidebar with a few key numbers or words as mini-bullets. Finally sort out the ‘lower-third‘. This bit could have even a logo in one corner, just like the telly station marque. Then a slogan here to sum it all up. And you could even put some cheeky small message in where the rolling ticker goes right at the bottom.

I quite like the idea of this as part of the essential recap element right at the end. The kind of thing that stays on the screen whilst a discussion forms. And it can be a great tool for gauging real feedback prior, through your in-house rabble-rouser too.

Then just as I was giving up hope of finding anything decent from the horse’s mouth, it turns out they’ve just had a makeover, their company name now with an added Hego suffixed. Here’s how their facebook page announced the news.

An idea to park up in the back of your mind. They use it as a kind of brand relaunch mechanism. But it might also work as something that simply describes the project personality that your prospects are hopefully buying. They also have a portrait version by the way, with yet more funky words. 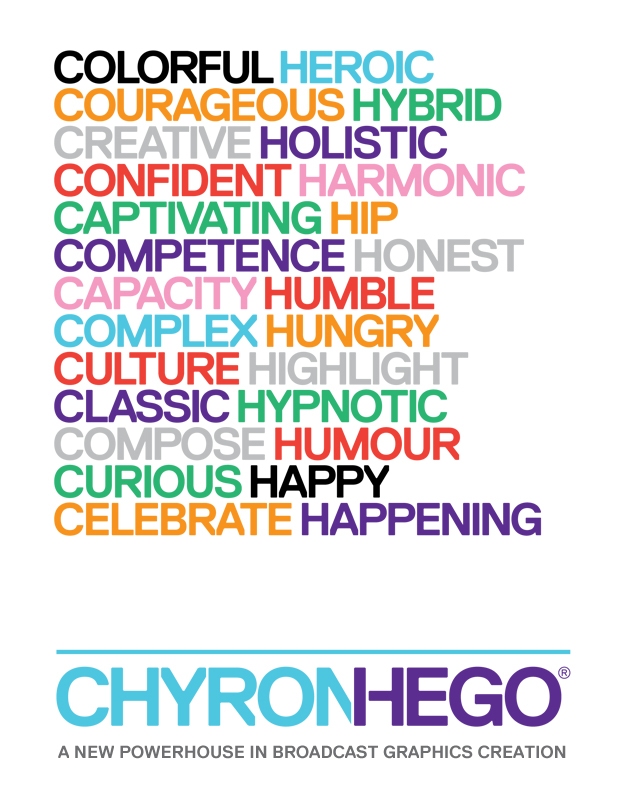 It goes without saying that this is a technique that probably works best with a pair of initial letters, like in this case, but you never know, fun could be had elsewhere I’m sure!