Yep, we live in an era of culture wars.

Typified by where any debate must be boiled down to the most entrenched of binary poles.

Neither side seemingly tolerant of nuance, flaws or dissent.

One most bitter example concerns the Environment. Capital E, note.

Are you guilty of heinous child abuse by needless causing of nightmares, tears and anxiety that leads to depression through mistaken brainwashing of how our next generation will see their world burn because of the overstated follies of their forebears?

Are you guilty of denying any problem exists, happy to guzzle carbon, foster inequalities and refute ‘the facts’ with your own ‘pseudo-science’, content in the knowledge that as yet uninvented tech will ensure survival?

Doubling down at either extreme continues. Despite the majority apparently being switched off by both the cries of ‘climate emergency’ from Extinction Rebellion and ‘the sceptics’ rolled out who reinforce Big Oil, unearned privilege and putting the wealth and power of an elite before true progress.

With a foot in between camps, I note a new tome; Apocalypse Never. Subtitled Why Environmental Alarmism Hurts Us All. Written by a one-time lauded activists who‘s now accused of flipping to join their new enemy of ‘ecomodernism’.

The author reposted his own summary, after originally censored by Forbes magazine.

In support of which is released its own slide-deck.

A page containing 161 slides which appear to scroll in supporting the threads of the book.

Strangely there appears to be precious little design literacy applied to them though.

Of those not produced by other means – such Bill Gates‘s – here’s a quartet selection to see how you could build upon their ideas.

Starting with part of its argument that reforestation is happening. This example coming from the belief that 40% of Europe is covered in woodlands: 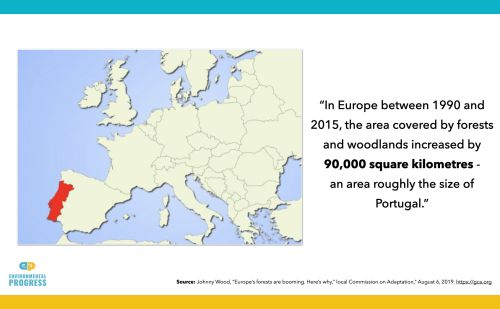 Then there’s an improvement ripe for replication, through the trusty before/after harvest;

Without explanation of the seemingly arbitrary choice of 16 wheatsheafs for the ‘before’.

How about this image-pie combo? 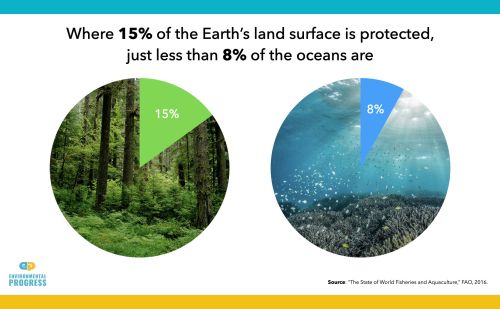 Maybe a less obvious pair of corresponding slice colours would bring greater contrast, not to mention less detailed pics themselves, such as overhead shots of simple expanse.

Always interesting to see how people deal with ‘the quote slide’; 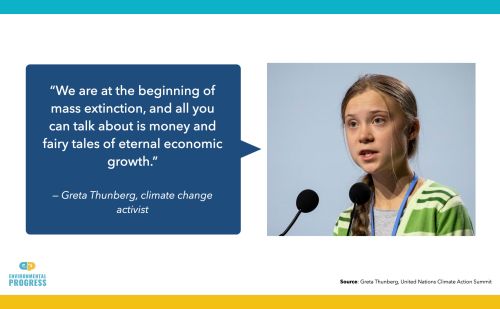