What is the one part of selling that most sets apart management from reps?

It’s got to be cold calling.

You can run deeper than this too. Think less of call centre style measurement of how much time is spent on outgoing dials, rather being forced to pick out totally frozen names almost at random, vaguely related at best to anyone remotely having any possible smidgen of interest in talking to you.

It’s always a good idea for a newly trained/arrived rep to issue their boss with the old “show me how it’s done” challenge. (Even if you get sidelined.)

Where this might be cunning in picking up technique (more often from hearing what doesn’t work) it is less enlightening when it comes to structuring your telephone hours.

When I last spent some time in proactive call-based businesses, those furthest along with technological wizardry unsurprisingly sold computer related kit. They all pretty much monitored the same activity. Typically, 4½ hours must be spent on outbound conversations each working day.

I’ve seen many different set-ups. Those without call-timing logs on their internal phone networks mandate chunks of time where you are watched like a hawk lest you stray from dialling. Ten ’til Midday and Two to half-Four are common such Greek galleon stipulations.

I still remember visiting Dudleys in the late 90s. They were an old-established stationer based in London’s East End. They had a team of around a hundred telesellers with turnover almost £200m. But they were stuck in the dark ages. They were more taken with “by royal appointment” meaninglessness than effective work design. People were arranged in teams of around six, facing each other in two rows of three. At the head of the table sat the supervisor. This is bad enough, but their seat and desktop were elevated. By so much it was like they were standing whilst all others sat. It looked, and felt, creepy. In 2001 they went bust.

My first significant introduction to cold calling was as Christmas drew near around two decades ago. The wheeze was aimed at ‘fattening the goose’. It was therefore nicknamed Goose Fat Week. My company’s sales boss wanted more leads. Who doesn’t. All the other reps were highly skilled and experienced, earning big bucks. Cold calling wasn’t their thing. Leads were Marketing’s job.

The boss decided to mix things up in our cosy unpartitioned open-plan office. Everyone was to come off the road for a full week and bash the phones. It’s fair to say that across the board enthusiasm was muted.

We were trying to reach what today you’d call CFOs. This is twenty years ago now. And even then they were tricky to get hold of. I somehow managed to uncover four genuine leads each day. And won my first ever sales prize. My team-mate (we called ourselves Slap ‘n Tickle) thought we’d succeeded because we were the hungriest. I was knackered mind you.

Yet our novice approach was ‘just keep going’. Put a cross next to a line on a computer listing paper printout and carry on. It was hardcore brainmashing.

But we did develop a bit of science through rudimentary analysis. We could just about retain our sanity making 80 calls each day (although you do have to clearly define a ‘call’). This tended to produce 15 conversations with ‘decision makers’. 4 of them would fit into our agreed ‘lead’ class.

Knowing your ratios turned out to be a classic cold call driver. Once you work out how often you reach what you seek, then not only does planning become much clearer, but improving your results gets easier too.

You can shape both your activity and progress by the numbers. But this isn’t all the answer when developing your optimal canvassing format.

The most disciplined cold callers (inclined to be the most successful) I have personally managed all prefer working in blocks. Many like to call in 45-minute bursts, then having a break for 15. I myself after setting up one embryonic business took a break only every 17th dial.

Interestingly, I recently learned that some programmers restrict themselves to uninterrupted portions of 25-minutes working flat out. An enforced break follows for 5. Their thinking is that 25 minutes is the perfect time slot for full concentration and therefore productivity. (It also keeps internet distractions at bay.) It’s called The Pomodoro Technique, in deference to Italian tomato-shaped kitchen timers. 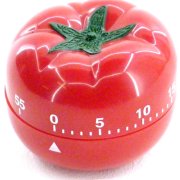 What about a cold calling Tomato Technique? Adapted for telesales then, set your tommy at 45 and squish through your list. As for your actual cold call structure, well, that’s a different matter entirely…