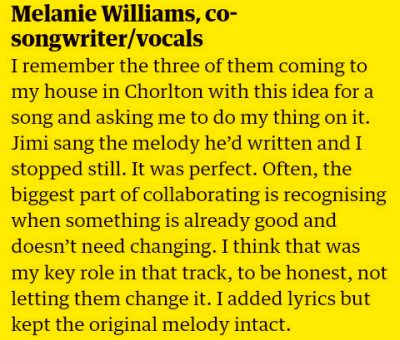 I do like a musical origin story. How someone came to write a song – or in extended form, those hour-long docs about classic album creation – often holds me in thrall.

What I like about this three minutes of early 90s dance emergence, is knowing when something’s reached a high mark of quality before you get involved.

This sadly is rarely seen in a selling setting.

How many times have you been subject to someone else – whether a boss, co-seller or non-Sales ‘helper’ – come in and tell you how you must change your pitch. When you know full well what they propose is not really good enough. Likely only there so they can later claim that they’ve had an influence.

It is wholly unnecessary.

Knowing where an improvement can be made and dismissing any unsuitable modifications are tough skills to master.

Yet if you back yourself, you can hit the golden target of having only the best ideas at play.

You can be ‘idea agnostic’. Hold an amnesty. No idea is too stupid. (Until it is). Why care from where a decent tweak hailed when your goal is to beat your number?

But alterations for the sake of them, that’s never a good place to be buried.

Who responds well to anywhere along the scale from a total rewrite to a new line that is so clearly out of kilter with the overall vibe?

I’m also reminded of the classic ‘hairdresser‘ refrain. Where they enquire as to who butchered your ‘do last time. Accompanied by plenty of diva-onics and dismissive tuts. When this is deployed in the corporate world the disdain can be brutal. Whether warranted or not.

Next time, you could solicit opinions first on which parts really pack a punch. And develop from there.

The key to collaboration then, could be to know what is ‘already good and doesn’t need changing’. A phrase perhaps you can use to your advantage when meddling minds would benefit from being better directed.