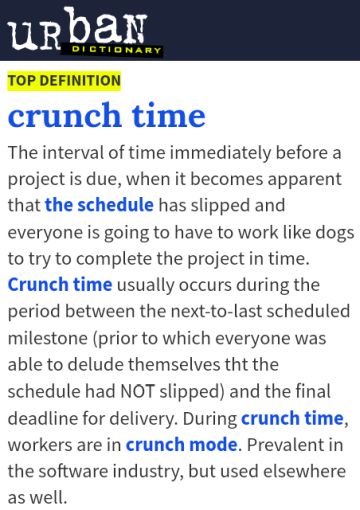 Crunch Culture made waves this month.

Aka crunch working, crunch time and crunch hours. This pernicious way of getting business done hit the headlines because of the conditions for developers of the world’s biggest ever selling entertainment product.

It’s makers are Rockstar Games. They’ve been teasing a second update for what in their trade feels like an eternity, suggesting that it’s now two years behind schedule.

Here’s how the bbc tried to throw some balance – whether merited or not, with their unhealthy obsession of false equivalence leanings – into their reporting of this issue upon eventual launch;

It had already missed two previous launch dates – Autumn 2017 and Spring 2018 – on the grounds that it wasn’t ready.

Mr Houser has since clarified that he was referring only to himself and three other members of the senior writing team.

However so-called “crunch culture” is a controversial area of games development, where developers can be asked or feel obliged to work long hours in the run-up to a title release.

“The problem is that most people in games get into games because they love them, and that lets companies take advantage of these,” said Grand Theft Auto and Lemmings creator Mike Dailly.

“They push developers to work these stupid hours, yet they could easily release the game with a little less content, and it would still be a massive game.”

Pieces abound online however alleging how such brutal hours were in fact unconfined, and standard across the whole coding team (and sector in general).

This is akin to a huge pet hate of mine, last minute merchants.

You simply must plan to avoid getting sucked down this wormhole to disaster.

After all, what rings true in software creation – even being named Brooks’s Law, where if you want to guarantee a delay, then simply add engineers to an already late project – also has Sales consequence (as I’ve blogged on before).

I shudder at the thought of ‘crunch closing’. I’ve been in Sales rooms where the end-of-period pressure is crushing. Mainly from ingrained flawed hockey-stick sales-graph acceptance. Trying to force deals to close with all manner of discounts or faux-urgency tricks which are simply not ready to be boxed off.

It’s best never to get in crunch time position clearly. So how to avoid ever getting near the crunch of this suffocating constrictor?

Even the much vaunted Miller-Heiman allude to it. Note their recommended daily routine. You may call first those imminently about to buy. Then pretty much dive straight into the coldest of calls to feed the top of your funnel before any other more appealing distraction takes hold.

People don’t want to hear this, but the way to never go anywhere near a crunch has two long-standing ingredients.

Follow and refine a deal sales process rigorously, and systematically prospect, even if you do a little at a time, do it every day.

How does your selling stand up to scrutiny on this ‘crunch culture’ scale?