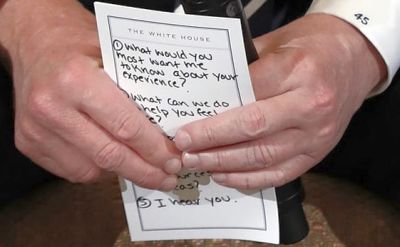 The rest of the world looks on bewildered. The absurd right to own a gun is now enshrined in America. Kids in school continue to get mown down. Nothing changes. So the gun debate is over. Carry whatever you want.

Yesterday My Boy Donny met survivors from the latest mass shooting (in Florida’s Parkland; 17 dead) and campaigners at his official residence.

It was extremely unsettling viewing.

The grieving vented. And who would ever blame them. One after another.

And all The President could really do was sit there. And listen.

Yet he struggled to look presidential.

What do you think when buyers sit through your pitch generally restless, and often with their arms folded tightly across their chest?

Then there was the cue card.

Widely reported, Leftists seized upon it. Especially that prompt to say, “I hear you”.

A President is supposed to be beyond such flashcards, right?

Well. Maybe not. You want people to get things spot on, not wing it. Can anybody really remember everything? Yes, you’d expect some level of prep and ability to recall, but sometimes, just like the greatest actors on stage, we all need a little help. And so it is with us when we present.

Perhaps the problem here was that they were all words. No shorthand (the single word prompts aren’t so), no acronyms, and certainly no iconography.

Then there was the medium. White House notepaper. I actually quite like the informality this brings. But I can see how detractors will dismiss them as just a few remarks grabbed quickly on the way into the meeting. Possibly handed over at the door, unannounced, unread, unbriefed.

I was reminded of four years ago and how broadcasters marked the (still) missing Malaysian airliner MH370. The tribute backdrop of victims portraits.

What if instead of a scribblepad, in his hand was a small printed sheet of similar pics, with his notes then shielded on the reverse? Or the same done with a selection of loved ones tweets. The media would have loved that.

Don’t let this example shy you away from prompt cards. They can be an essential – and acceptable – part of a complex pitch. Just make sure you consider them as their whole package.