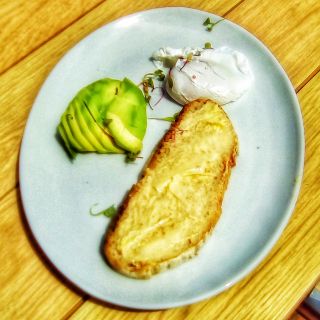 “DIY Breakfast”. Newly opened spot of rapidly expanding coffee shop chain. This one, unlike all others, inexplicably bars itself from selling bacon and alcohol. It will not be seeing my further patronage.

The waitrons, all super-keen, have clearly been through their Corporate training wringer.

A pretty sound it is not.

The options here being half-dozen categories of items, each with a different price band.

You start with the style of bread toasted you select from four. Then an “egg to your liking”.

You quickly see what’s coming with these pair;

How many slices? Just the one? How many eggs? Not two?

On the bombardment thunders. They hoping you choose more than you planned. Through the assortments of cheese, carbs, veg and extra proteins.

I kept count of the upsell batterings. Then just when I thought it was over, a seventh;

You look like a man that likes his coffee, want another…?

Don’t get me wrong.

To upsell is human.

It can be a noble pursuit.

But in this manner, the relentless nature of the questions to take an extra something or other is plain misguided.

Machine gunning your way through an HQ stipulated semi-script does nothing in the long run for your bottom line. I doubt I’m the only person who after Visit One will now walk past rather than pop in. Not due to the porcine or tot absence alone either.

I recall a New York experience in an enormous Downtown sports bar. The server just did not stop pushing for more lines. To the extent that it became a performance joke for my table. When the last lad whispered to me boasting that he could order without eliciting a barrage of further options, he thought he’d nailed it; “I’ll have exactly what my mate just ordered”. But no! Still more pitches somehow flowed forth.

When the tiresome became comic.

I did ponder in my brekkie instance how he could have been smoother. Save up the extras all for one go at the end? Pick a sole option to promote, or maybe just a couple? Matter-of-factly say something else goes really well with the so-far ordered?

It’s a fine line between good selling and antagonising the customer. Whether in retail or our solution sphere. Make sure you don’t fall foul in this regard, whilst still asking for that little extra.