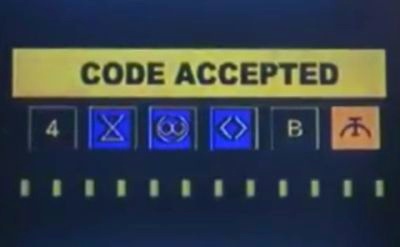 We’re treated to a host of Netscape era visuals.

Yet one apparent innovation caught my Sales eye.

An A-bomb is set to be sent to shatter the danger. Up top you can see the moment the code is punched in which arms the nuke.

They seem to emanate from the keyboard below;

I say ‘pictogram’, yet purists may baulk at my interchangeable terming. There are nuances.

Glimpse these via this;

Have you heard the one about the pictogram, the ideogram, the icon and the logo?
They all appeared on a sign together and everybody was lost, insulted and confused!

For selling purposes, a symbol can be a powerful tool.

One that uniquely represents what you’re about. What your prospect wishes to escape. Where they aim to go. How they hope to travel.

A single slide with a simple shaping.

If only it were as easy to create on a bid as the examples above look. But persevere and the desired result could well be explosive.