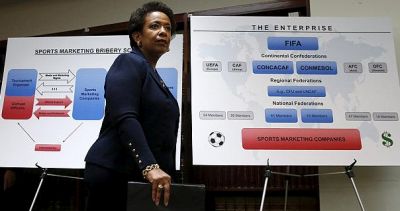 It’s not often a Powerpoint slide gets its own global front page splash.

Michael Jackson‘s doctor and diligent Canadian police have achieved this during the past half-dozen years. (With notable inside coverage garnered by the Large Hadron Collider and U.S. govt snoopers.)

Now it’s the turn of an American prosecutor.

Finally, finally, someone has managed to bring to task what they describe as “corruption that is rampant, systemic and deep-rooted” in world football’s governing body, FIFA.

My above shot is a screengrab from their press conference. Handily alongside the country’s appointed accuser-in-chief, stand two giant easels with blown up slides the size of home cinema screens. 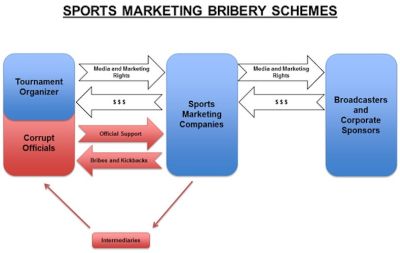 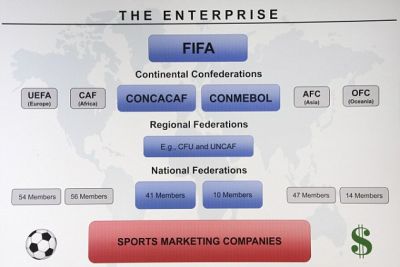 At first sight, these depictions felt rather uninspiring.

With little in the way of design literacy nor “sell” on view.

The second pic is basically an org flow. Complete with natty clipart of a 70s football and dollar-sign. Down its spine is where the wrongdoing is strong. A touch disturbingly, its titular word “enterprise” snatched as a synonym for “criminals”, mistakenly shorn of its preceding adjective, “evil”.

The first has the helpful word “bribery” in its (underlined, note) title.

And what’s not to admire about the bottom-left redness. “Corrupt officials” with “bribes and kickbacks”.

It is presented in an unsophisticated, straight-forward manner. Yet not in the kind of simple way that effortlessly removes complexity and hammers home the key point right between the eyes.

The day after the mass arrests from the Swiss five-star hotel of choice, I was puzzled why only one news outfit appeared to have tackled these graphics.

London’s world-straddling Financial Times. They merely reproduced it in their FT-pinks, with subliminally sweet dark and murky FIFA-branded background. 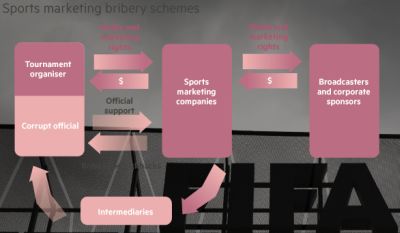 Considering the timespan of several years’ investigation, I bet legal minds regularly had to explain afresh the trail of this “world cup of fraud”. They will have numerous times had to stand at a whiteboard and draw out the players with channels of give and take.

I sense that when this was done rather more intimately, by grabbing a piece of paper, sitting alone with someone, really good drawings emerged.

Which is why I’m surprised different imagery isn’t on display here.

The corner spot that the dishonesty inhabits would surely have evolved to become a stand-out feature.

When you repeat such scribbles, improvements tend to build. Audience reaction suggests amendments. You get a true view of what scores.

Creaming off the top. Rotten to the core.

To demonstrate, the “bribery” treatment. Here’s the result of just twenty seconds with pencil in hand. Swapping the likeable blocks for pyramid tiers or concentric circles. A very first draft times-two: 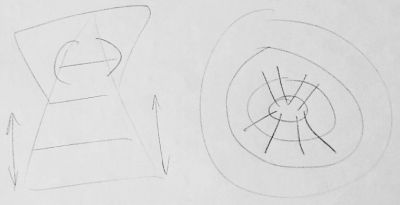 Surely ideas abound from this pair of platforms.

And the same applies for how we get our points across in the Sales arena.

Many a satirist has re-visioned FIFA as MAFIFA and THIEFA, Then there’s their risible slogan. Where “for the game, for the world” becomes “for the gain, for the bung”. I think a similar re-crafting of these slides is both possible and equally more worthy. Then merrily built on by us in our field.