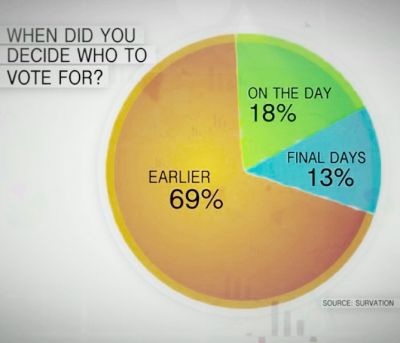 Any solution seller will know the nerve-filled vacuum that is the day you await the go-ahead.

The ‘decision making unit’ is in session. The voting panel poised. You sit by the phone. Shackled to the moment each hand reaches high in the air. Hoping the psephos will mount in our favour. That is, we get more ‘pebbles’ for each vote in our pile. And no ‘black ball’ seen.

All the investigating behind the scenes has given us an idea of what the score should be.

So you’ve pretty much nailed on that you know the result.

It’s back to the bumblers that are the UK pollsters.

The graph above is a BBC Newsnight piechart that examines any impact on their hapless/inept* forecasts “late swing” may have made. [* delete as you feel apt, but be informed that Obama’s campaign guru, Jim Messina, was scathing about the UK pollsters’ work, calling it “garbage”.]

First off, if these figures are to be believed, then how would we cope with one in three votes being up for grabs in the eleventh hour of our bid?

Not many in Sales Management would stand for such a seeping unknown.

One suggestion, via the differing binary market of USA, is to “warm up” before the voting intention question. British surveyors go straight in for the big qu up-front, no messing.

Americans though, leave this to later.

What issues most important to you?

What do you think of the parties?

What do you think of the leaders?

These kinds of questions come first. They feel that then the respondent has time to think about it a bit, leading to more accurate answers on the big one.

Yet this don’t-go-in-cold approach is thought to be a red herring on the Westminster scene.

David Cowling, broadcaster BBC’s head of political research, is sceptical on all sorts of fronts.

The British experience is apparently that such pre-questioning “conditions” and so “distorts“.

A succession of choice ‘x’ can be (and does get) followed by an overall selection ‘y’ in the privacy of the voting booth.

Although the presence of a calibrating question is felt to have some merit.

So where does that leave our ‘complex selling’ predictions? How should we canvas where people side, ready to plot each buyer’s pin on your political map?

If people are simply too busy for a decent ‘chat’. If you hear “don’t knows” aimed to get rid of you quickly. If you sense people don’t want to admit or confess to you. If you face them not wanting to say something you might not want to hear.

Then any of these may not be just late deciders, they may be disinclined your way at all.

The old selling antennae likes the kinds of conversations that start with an assumption of negativity here.

Where’s the most airtime going?

The more matter-of-fact, the better.

Where any of the emerging issues sit should give you a clear inkling into how  you stand.