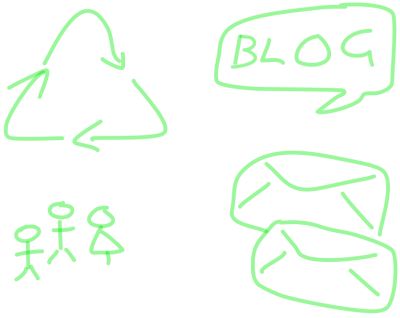 I was impressed recently being talked through a marketing brainstorm session. It was run by an external agency, as commissioned by a financial services firm’s wealth management division.

Before the event, the organisers spent time to ensure they did what they termed “dress the room”.

The results were startling.

I was shown photos taken of the meeting room used.

On each of the four walls something exciting was going on.

As you walked in, the opposite wall had maybe a hundred foot-square sheets of paper stuck on to it. Each one had an image. A bit like the ones I’ve put at the top of this blog that I scribbled from memory. Each one signified a particular point that could be made during the session or helped explain an element of the task ahead.

On the adjacent wall, either side of the projection screen, there were coloured cut-outs and the like, depicting the originally sought-for aims of the session.

Then the other two walls were prepared for the assembled talent to draw and write all over.

A final, awesome touch, was to take such existing and unique imagery, and print out labels for bottles of water and notepads.

It was great, and judging by what I was told, worked a dream for all concerned.

So. What do we do when we have an important idea-generation forum with our prospects?

We make sure we’ve booked the meeting room on the admin systems?

We bring a spare projector perhaps in case the one there is double-booked or packs in?

We might even be so embittered that we remember to take our own markers and flip pads for back-up?

Let’s face it, we don’t do an awful lot.

Now. I realise that to go farther takes effort. It probably strikes the first-timer as daunting, time-sapping and unnecessary.

Yet what are we really talking about here?

How long does it take to draw out a prospect’s departmental organogram and slap it to the wall? What about drawing out one of their processes? A timeline of how they’ve got to where they are? A performance graph with associated cool images pasted on? Then there’s always a picture of your customer service or support structure, with interaction points and escalation triggers highlighted.

Imagine having these kinds of large flip chart papers stuck on one wall.

Seen the instant your prospect strides in.

And as for the charge of ‘irrelevance’… Why bother wasting hours in Powerpoint when you can simply and quickly scrawl and leave lasting impact that you do, actually, give a fig.

Who wants to look the same as the other slidedeck jockeys going through the motions, when you can stand out as different and memorable?

They make good discussion jumping off points. And raised adroitly, will lead to your prospect taking the pen and annotating, even drawing afresh, what’s really important to them.

And for how much extra thought and effort again?