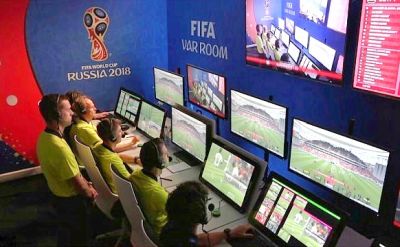 The video assistant referee room for the 2018 football World Cup – I also note memes which switch action on the pitch to instead show screens with such as the video game Fortnite and even, ahem, pornography

What on earth are those kitted out referees watching in their “var room” during this football World Cup experiment?

Mistakes have been so plentiful that without the technology of the new ‘video assistant referee’ it feels like we’d have seen more correct, not less, decisions made. Especially after the shambles of Group B’s conclusion.

Indeed, one summary during the final clutch of group games reckons that of the 20 main instances, only half ended up correct. Half!

One of many problems with the process, is that those in the video room seem so inconsistent for when they whisper in the on-field ref’s ear that a mistake may have occurred.

It seems the instant that the ref is forced to run to the pitchside review screen, the pressure to reverse the original call is insurmountable. Which is wrong. So why bother.

I heard a psychologist assess this. Her stat was telling;

your gut reaction on a decision is right 93pc of the time.

Malcolm Gladwell knew this all along in Blink. (Although other assessors urge a touch of caution with intuition.)

In any case transposing onto football here, it roughly means that on only one in fourteen occasions you should be awry when going by ‘gut reaction’. Not the ‘var’ 7 of 14, hey…

Which leads me onto the selling parallel.

When was the last time you asked a prospect what their ‘gut reaction’ to something was?

Then whether it was worth checking further?

And if so, how would they do so?

It may well be that knowing their instant thought on the matter could set you apart.