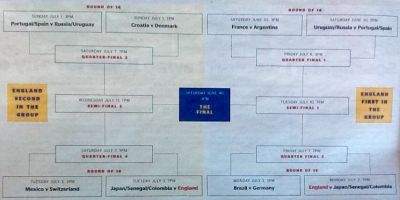 Workplaces across my homeland were abuzz Monday from a remarkable sporting glow.

England broke all sorts of records, and hopefully slayed many a longtime dragon with their 6-1 demolition of Panama in their second World Cup group game.

The smother of sweltering mid Russian heat no barrier to the precision deployment of clearly extremely well rehearsed set-piece plans.

This aspect especially bleeped on my Sales radar. 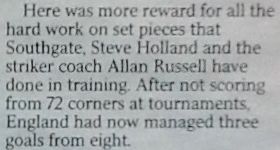 The above snap is of a Henry Winter paragraph. He regularly wins the writers’ own best-of gongs.

After not scoring from 72 corners at tournaments, England had now managed three from eight.

Then there’s this addition, from Jonathan Northcroft;

No country is executing set pieces [at this world cup] better.

In their two matches England have taken ten corners and produced an effort on goal from seven.

I guess with those final two corners goal-less, next opposition Belgium might be expecting to yield on that first corner defended come Thursday’s final group game.

So here’s a squad that has practised corners in training. Surely everyone does, right?

Perhaps not well enough, though.

72 on the bounce without a single goal. Then the good old busses roll up. Three at once.

We have several instances of our own selling set-plays.

From initial pitches to ‘discovery’ routines to standard presentations to specific objection handles and many more alongside.

Regular readers will know that I feel salespeople in general would well benefit from extra, targeted preparatory fundamentals.

How are you truly preparing for them come game time?

Are you on a 72-long scoring drought or generating opportunities from seven in ten?

If it’s nearer former than latter, then time to make renewed effort on your own training ground.

obscured through shrinking, here’s The times’ #epicfail in close-up – note incorrect dates for QF2 (Fri July 7 should say the 6th) and, most incredibly, the Final, being somehow 10 days before the semis… 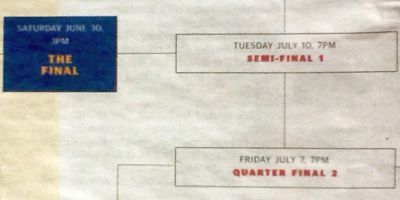