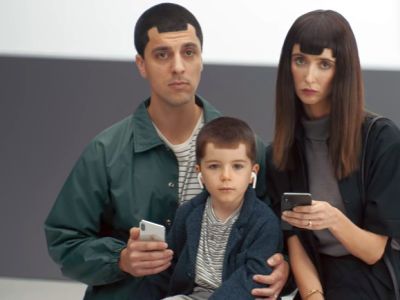 Results for the tech giants’ latest quarters roll in.

Samsung posted a drop for their electronics arm.

Their latest smartphone evolution – Galaxy S9 – was it appears neither a significant jump from last time round’s S8, nor different enough from anyone else’s high end offering. All in a sector which is described at best, as “stagnant”, with cheaper rivals catching up fast.

So what’s their response?

Under the label “Galaxy Ingenious“, a series of seven bitesize 30sec ‘comedy’ skits. Each taking aim at a particular feature they feel they’re better on.

As you can see from the above screenshot, this includes poking fun at Apple’s “notch”. (It obscures your screen.) With a family that visit their Apple Store “all the time”, fresh from the barbers it seems yet looking strangely glum.

Kinda funny. But not all that so.

What struck me, is that Samsung claim to be the smartphone market leader. By market share they did beat Apple into second for 2017. So why are they now spending time taking potshots at their closest rival?

Well according to this industry piece, such behaviour is a warning sign.

A classic case of a company in a losing position, frustrated by unsatisfactory results, and desperate to “make something happen”.

A revealing indicator of how they feel, deep down. Such “behaviour is never typical of the winning side”.

I grew up in solution selling environments where bashing the competition was considered mandatory by most.

Yet I was lucky to meet a rare soul or two that felt the opposite. I learned instead to never openly discuss the opposition. It was really all about my fit to the prospect needs. Yes, you’d lay the odd trap for those set against you. But do not get into a Top Trumps style card game. No deal is ever truly won on “the numbers” alone.

To throw shade, as the modern expression has it, in this way shows you up and means people (buyers) are much less likely to root for you.

Yes. Knowing your competition on a bid is an essential pillar of tactical planning. But that should not be mistaken for then going on to actively knock them.

Cultural differences around the world may suggest that some audiences would take such digs positively. I do not share that thought. Could your stance push you down this year’s Samsung hole? If so, switch it.