I caught Scott Hardy promoting a trio of new products at CES 16. He runs Polaroid. Sadly I cannot find video of his pitches to Sky News’ Martin Stanford. A shame because they could have been a sales case study in how not to do it.

Let’s start with a bit of background. Polaroid are in a spot of bother you feel.

Their marketing messages don’t seem to grasp reality. As you’ll see from the above screengrab of their self-portrait, they think they’re a respected brand. I cannot fathom why. Here’s the words of the CEO himself.

I know no-one that “trusts” them. Anyone of my generation only used their instamatics once. Picture quality fist-shakingly poor. The tiny number of millennials that even recognise the brand will know this bad rep and likely be ill-inclined to try them anew.

Who cares about 75 years of nothingness? Certainly nobody on which their funky new wares are aimed. It’s a bit like myspace launching an ecommerce app today.

Now focus on their Cube+ (the other two were their latest ‘instant’ evolution and 3D printer). 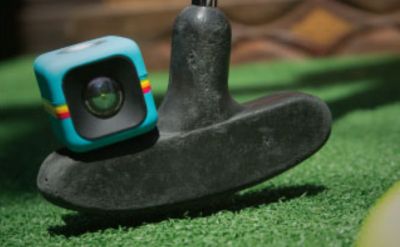 A clear attempt to cash-in and piggyback on sector-creating GoPro of “dashcam” global fame.

President Hardy emitted laudable enthusiasm. Yet it was of the type that was the same throughout. It reminded me of when a child speaks excitedly and pauses for breath in all the wrong places. A fast monotone is still monotone.

He likes the term “lifestyle camera”. Which is a dodgy phrase. As with all such utterances, I’m tempted to say SFW? In fact his speech was littered with jargon.

He never mentioned GoPro by name, but it was so obvious he was sniping at them it bordered on embarrassment. Then you read how their adverts reference the market’s gorilla. 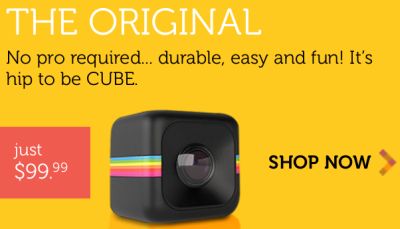 The good news for them though, is that positive press can be found. USA Today liked it.

Scott calls this space “crowded”. The enormous profits and valuation of its shaper have proved irresistible to many imitators.

Do you really need to have a ‘GoPro killer’ to enter it?

Or should you rather know your specific segment and go after it with a laser?

I tend towards the latter. Polaroid the former.

If you’re in a place up against a dominant force I hope you aren’t making the ‘cube’ mis-step.