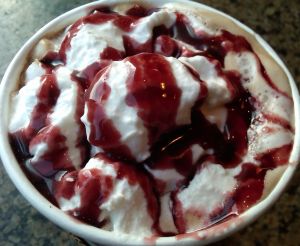 San Francisco. Peet’s Coffee & Tea House pre-dates Starbucks by five years. I got too tucked into their decadent raspberry mocha (above).

Cape Town. The Creamery Cafe. Craft ice creams with coffee meant I took an affogato for a cheeky pud (below). Sea Salt Caramel with an espresso (by local roaster Rosetta).

Long story short, as an offer the raspberry mocha didn’t fly when tried in the Cape. And the affogato was also taken off the menu because no-one bought (served with white porcelain bowl rather than the milkshake glass I took, yet by mistake remained on the till as an item).

These are in my humble view both errors of positioning, not product.

Let’s make sure such blunders don’t afflict your price list either.

In the first instance, Capetonians naturally eschew syrups in their coffee. Yet to pitch a Dessert Coffee was never tried.

Their Vietnamese Iced Coffee (and Irish) were total winners, so raspberry wouldn’t have been such a stretch.

In the second, ice-cream and caffeine also strike the locals as unsuited bedfellows. Yet promote ‘something different to try, just like the Italians…’ and you should gain traction. Especially with more natural complementary flavours like Malted Milk and Sweet Cream around.

So long as these options don’t appear too incongruous, like widows and orphans, more margin should result.

There are the odd great takeaways from a thinking barista’s menu. Does your price list leave such a good taste? 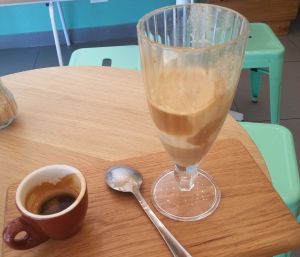