As regular readers may have sussed, I do love a cheeky little Sales newsjack.

Not only has this 2min clip above had (at time of blogging) almost two billion views, anything Baby Shark related is already slated as the must-have 2018 christmas pressie to give toddlers this year.

There’s a whole meme-army of troops worldwide posting footage of themselves doing the Baby Shark Dance in colourful costumes and bizarre locations.

It clearly is quite the thing.

Attaching a message to a latest craze I’ve found to be a good way of gaining traction for a presentation message.

It came almost by chance to me. When selling to the Toy Trade over two decades ago. I carried around a box full of the latest best-sellers. I used them liberally and shamelessly as props. With much success.

One thing I noticed about a fad, is that everyone would make known their opinion on them.

Also, seeing a senior exec playing with something and trying to work it out is a leveller of beauty.

Anyway, among the standard slideset finance-charts and quote-wisdom and league-tables, to pop in something totally different can be a winner. The jolt your audience attention needs to actually go away remembering something positive about you and your pitch.

If the forum has enough present, then you can get those ‘in the know’ to enact the moves to those sadly as yet unaware. Doo doo, doo doo, doo-doo.

Even the most stiff of Boardrooms could then be your putty.

Bear in mind, it’ll only work if you do genuinely have an aligned messaging.

Something needing to be a hit by the end-of-the-year. Trying to climb the charts in some way. Seeking involvement of some masses.

Finally, there’s the way you introduce this.

You can of course merely vocally bring it in.

This below took me ninety minutes in powerpoint.

I thought some fin lines on the original animation a tad harsh, so softened them as per their plush toy ranges.

The real time thief though, were those teeth.

Still, now I have it, I can merrily swap colours in and out at my leisure according to any corporate palette required. Making for a winner of a slide I’m sure this Michaelmas Term. 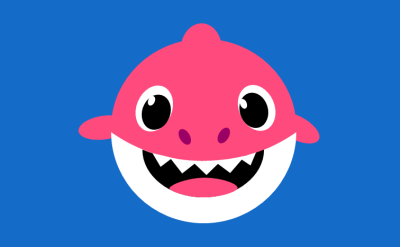