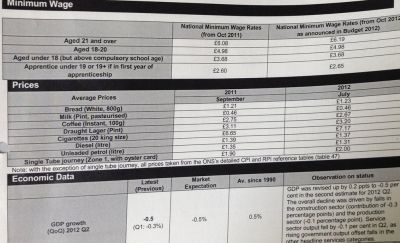 Who really cares if your candidate doesn’t know the act at number one in this week’s pop charts? I have no idea what a pint of milk costs today. Even though I can tell you the cost of a cup of coffee anywhere across three continents right now…

When I first became aware of The Economist’s Big Mac index, I instantly altered it with my friends to something way more accurate. It’s all about understanding the ‘real’ exchange rate. As exposed by non-traded goods and services price differences. Rather than spivs gambling on trading terminals.

So The Heiney Index became our guide. As the Dutch green-bottle beer really is everywhere.

In the wake of our the UK’s recently resigned Prime Minister quitting all politics, the pic up top is everywhere across social media.

Tracked down perhaps to discovery by the Lefty Guardian. Apparently part of his live 10-page “economic briefing” document;

“[it] appears to have been designed to prepare the then prime minister for awkward questions from the media – with the price of bread, milk, coffee, diesel, unleaded and a single tube journey in central London also listed … like the rates of VAT and income tax, fuel and tobacco duty … the disability living allowance, housing benefit and working tax credits, as well as GDP growth, unemployment rate and average earnings”

We’ve all squirmed at footage of wannabe world leaders come a cropper by not knowing such “everyday” facts. Yet I have a touch of sympathy for them. One victim the other day even had the guts to halt such interrogation with the pushback yelp, “don’t start pub quizzing me!”

Yet in similar proceedings your prospects may not be so forgiving.

What is your equivalent intel about your prospects, their market, their future?

There is an argument that it can be better to not know. So long as you ask. A genuine curiosity often rewarded with vital rapport solidity.

But this will only get you so far. Selling to engineers for instance, you might be able to get away with, say, not knowing the difference between a pump and compressor. Once. But amps and watts? Or chamfers and rounds? Most patience has a limit.

So have you an internal flashcard sheet about crucial data? Or as Number 10 called it, your “data dashboard”. Start with figures. Then progress through to the more subjective. Especially understanding the ‘big debate’ in their field. Framing the nature versus nurture, left v right, Batman or Superman split that’s taking all the airtime in their world at the moment. And get to know it very well.