Micro-targeting has been around a fair while across the democratic world. The current American presidential race introduces technology like never before. Skynews ran a piece on the delights of an app for that.

Their reporter stood outside the house of a lady called Sarah, identified by the Obama team’s app as worthy of attention by dint of not having a registered party affiliation. Here’s a couple of screenshots. 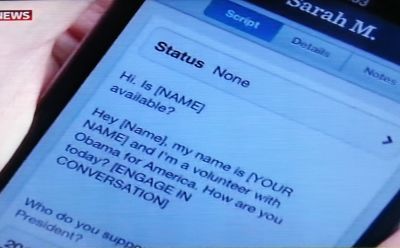 I naturally noticed that this part of the app was entitled ‘script’. 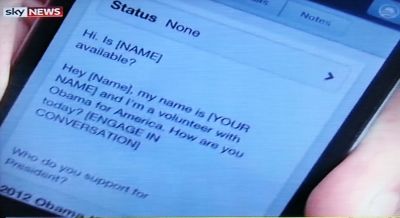 Hey [Name], my name is [YOUR NAME] and I’m a volunteer with Obama for America. How are you today? [ENGAGE IN CONVERSATION]

Who do you support for President?

How old school no school is that?

Being at the time in Africa, I couldn’t download the app to check it out myself. Nor could I find its ‘script’ online. So there may be jewels contained elsewhere in the code of which I’m sadly unaware.

Even so, it’s difficult to see how this script starts off on anything other than the wrong foot.

Let’s start with the aim. Is there one? Explicitly made? Is it to simply record any voting preference? Or is it to secure someone as on the same side?

It’s only once you nail the precise objective can you really start sculpting your ‘script’.

In this case, I’d likely kick-off with my trusted underwhelmed, hesitant, almost nervy delivery. And use the best forms of word I’ve ever come across for this. In its entirety, something like;

hello…I just wondered, erm, if you were, erh, grappling with who to vote for next week for president… is that something you’re grappling with?

The difference in results would I am sure be enormous.

In the spirit of neutrality, the reporter then popped along to one of the opposition’s campaign HQs. And here was a prominent note on a wall. Hardened cold-callers will smile at this one.