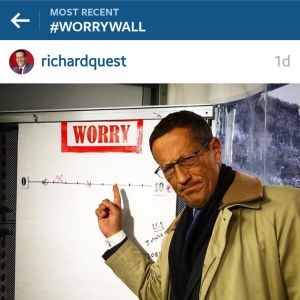 Thankfully, Richard Quest’s yearly CNN jolly turned out to be just that.

Last time’s cheeky tool The Risk Map morphed into his Worry Wall this.

Unbelievably, there are global chief execs – earning way more money then they merit – who feel we are at a state of nine out of ten global panic.

There were also the usual bleats about needing stability. Again, completely misguided and showing up those who do not deserve the lofty positions they hold. As I’ve blogged before, stability is the enemy of progress, innovation and Sales.

On this note, I was reminded of the terrific Evan Davis on Newsnight last year asking of former US Govt money man Ben Benanke ‘pithy advice to future policymakers?’

Also, quoting from the WEF’s own website, 4 risks to the global economy in 2016, “but the outlook isn’t all bad, says Christine Lagard:
1. The triple transition of Chinese economy (moving from industry to service, export to domestic market, investment to consumption)

2. Commodity prices trending lower in the past year. (But the low rates have been accelerated by the fall in oil prices. “This will probably improve slightly as demand improves over the course of the next few months,” says Lagarde.)

4. The flow of capital from low-income economies to advanced ones.”

And these people wonder why they don’t get lavished with respect.

The Quest Worry Wall is a winner in the sales meeting room.

On a sheet of the flipchart in the corner. The side of the whiteboard. The bottom half of a page in your notebook placed mid-table.

Where are your prospects on their worry wall?

Particularly delicious if you have more than one prospect personality in the room.