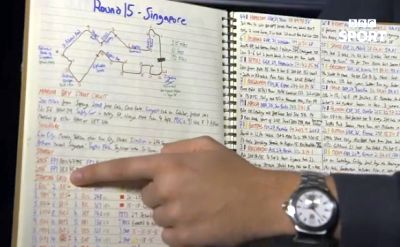 After catching possibly the only interesting moment to happen in F1 motor racing live this year – the start of the 2017 Singapore Grand Prix (thank you, rain) – when searching for “reaction” after the paint had (maybe) dried (namely hoping for a Vettel penalty) I came across a brief video of the BBC radio commentator showing his pre-match notebook cues. 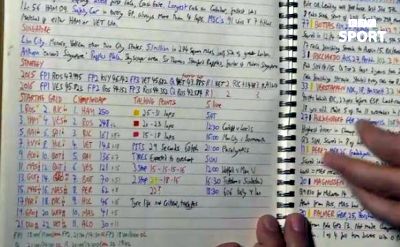 I feel it only fair to point out my disdain for today’s breed of commentator. What a revelation it was to be able to push a button and have the sound feature only the atmospherics. All voice happily muted.

When listening on the radio, you are though stuck. We’ve got to a stage where radio guys know they can be swapped onto the pictures by viewers at home. So they’ve become telly orientated. But with ever more worthless chat. Meaning the distinctiveness of comment alone is forever lost. Even the cricket suffers from this. Much too often, like their news peers, presenting partial opinion as fact.

So here is the writing of Jack Nicholls.

There’s actually precious little to get excited about here in terms of breakthrough knowledge. Which is kind of a good thing.

I’ve heard football commentators tell that it takes a full working day to ready their notes for the game they’re set to do. As you can judge by the doublepage spread above, such preparation is not a short task. But a whole day?

One of my constant bugbears is the criminally little amount of prep salespeople conduct before key meets. Even those that travel a fair while in the car sitting alongside a colleague can (and all too often do) spend virtually not time at all ‘warming up’ properly.

Of all the salesteams I’ve been privy to, I have never known a pre-call discipline that extends to producing an effective planner sheet. There are several reasons for this. Some valid.

Yet I cannot help but wonder how superb a two-page doc that you unfurl in front of your prospect may in fact become.

Written in shorthand too, it could not be accused of giving your tactics away.

A key schema or two – to both help test understanding and to whiteboard – would be your equivalent of the race track map (top-left of Jack’s work).

Reference stories aplenty could be akin to the day’s full station output listings to trail from the bottom-right of his left-hand page.

Then where the whole of the right-hand sheet is given to stats and mini-bios of ‘interesting facts’ about each driver, our writing could see main players role, achievements, hot buttons, motivations and vital question tests.

Detailed call plans as policy fall by the wayside.

Spending just an hour though – whisper it, even in your own time – setting out vital background and ideas could make all the difference between you and your competition.

One further tip has to be on ‘reusable sales data’. if you are going to drive down this road, then do it in a way that means you won’t be laboriously re-copying out the same text if you come to make a second doc for the same company.