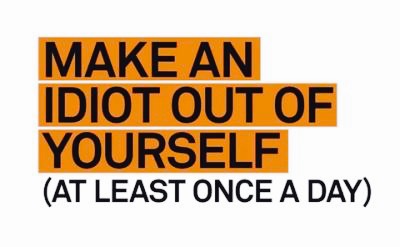 Having noted snaps of his slides, then watched his 50min Design Indaba show, I bought the book.

Wisdom on the essential glory of failing from the collected photographic oddities that would normally adorn the modern-day equivalent of the cutting room floor.

I was glad I did. The filmed presentation is almost wholly a showreel for his adworld greatest hits. With occasional text slides of insight. In addition to his opener I show up top, these include;

Confusion Makes The World Go Round

If No One Hates It No One Loves It

A Good Idea Has No Borders

The premise of his thoughts is admirable. The advertising industry is over-focused on perfection. He doesn’t like that it surrounds itself within perfect imagery. So he seeks beauty of the non-perfect.

He displays dozens of examples. Disasters of public signage, architecture, toilets. The overexposed, the viciously cropped out, camera strap obscured, ever-shrinking central figures, black dogs as mere silhouettes. Not to mention the x-rated penicopia section, by the way. He is Dutch, after all.

He runs through his first ever client. Amsterdam’s Hans Brinker Budget Hotel. Refreshing and successful. You’ve got to love his rock solid metric on impact. The measure of annual occupancy, “overnights”, rose from 60,000 to 150,000.

I hope we can all provide something similar.

He’s grown since. Lately behind the terrific huge supergraphic artwork;

Which he points out wasn’t a hit widely at first, but now is rightly a fixture.

So how can a salesperson “make an idiot out of yourself (at least once a day)” and both avoid the sack and make good? His answers include showing people light by seeing the world in a different way.

Do you understand your grades of fail? He cites the “prophetic” to “epic” passing “happy” and all manner in between. Familiar tales of serendipity (Coca-cola, pacemaker), multi-rejection (KFC, Harry Potter) and that “even robots make mistakes”.

The photographic editing he curates of sliced negatives, folded pics and anti-photoshop imperfecting generate many an idea for a sales presentation.

It’s always fascinated me that as a profession, a Sales failure rate of 2 in 3 is considered as what the stars achieve. Lack of success in-built. No-one can ‘win’ every deal, right?

So here’s a key para;

These major and minor catastrophes I’m referring to aren’t mere learning experiences – after which wrongs are righted, instruments recalibrated, courses reset – but are themselves early brushes with success

Yes, as a by-product, we’re also “wading through the swamp of inspirational platitudes”. But his main point – of accepting failures for their true worth – leads you to a place where you wish you were trying out more varied, more interesting and more full stop different ideas.