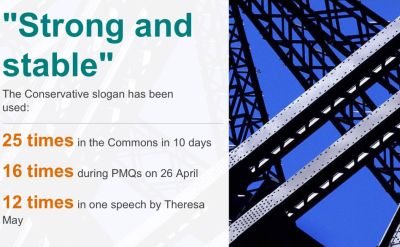 You can spot the most successful leaders around the world right now fairly easily. By successful, I mean the ones destined to win. Stick around a while. Considered a natural helmer.

It’s when you ask someone else what the hopeful leader stands for. And they duly rattle off one of their sayings.

In the UK’s surprise, snap-election six week campaign on at the moment, such insight arises once more.

Only this time, from the transparent attempts of the leading jockey to impress said values on the electorate.

At the final parliamentary set-piece, Team Theresa May time after time robotically delivered the phrase “strong and stable leadership”. The idea being to implant upon voters that she stood for this most vital of present currencies, whereas her ‘coalition of chaos’ opponents flounder nowhere near such desirable waters.

It is a clear plan of attack. She may even have said this slogan 57 times already over the past few days.

I remember in the dark ages (The Nineties) a presentation skills workshop. The jazzhand stage presence with 1970s children’s tv presenter wardrobe suggesting each slide must trigger you saying your key phrase at least three times. Apparently, only after the seventh time of dropping it would the audience take it away with them.

Regardless of this preaching’s validity, it’s enough to make you wonder why presentations aren’t simply half-dozen slides with your key pitch written in snappy soundbite form upon each one. The same every time save for maybe a slight colour, font or background change-up. No matter the spiel you employ alongside.

I also noted this week a focus grouper from Britainthinks announcing that voters right now most valued strong, authentic and charismatic leadership. Current PM May seeks to tick the first of these boxes with her public to the exclusion of anyone or anything else getting a look in come polling day.

Indeed, this construct of “strong” surpasses all others to the extent opposition parties are trying to claim it as their own key quality. Alas, they are not setting, but chasing the agenda. Normally a recipe for failure.

And so it must be with us in the solutions field.

There’s usually a cheesy concept the target chief exec rates above all others. Acolytes and dissenters alike will know of it. Our job is to uncover it before the competition, reframe it as our shared quality, and repeat ad infinitum. 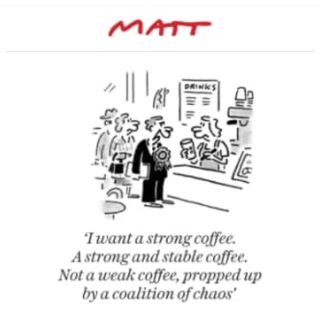