Joshua-Klitschko. A classic heavyweight bout. In front of a whopping 90,000 crowd. A sensation is born.

During the glowing media plaudits after, one seasoned hack quoted Jack Johnson, America’s first black champ a century ago. Talking about how the elder statesman surprised commentators by boxing unexpectedly different, with attacking tactics from the off, he cited cutting insight in his arena. Paraphrased as;

the essence of boxing is to fight away from your weaknesses

Not focus on your opponent’s weaknesses. Nor play to your strengths. Rather, specifically, know where you’re weak and make sure the fight doesn’t take place there.

How far away from your weaknesses are your sales being bought?

footnote – fruitlessly searching online for the source material, look what the ‘genius’ that is google autocomplete prompted. That bottom one in particular an insult to Turing. Always a winning slide idea in this though…; 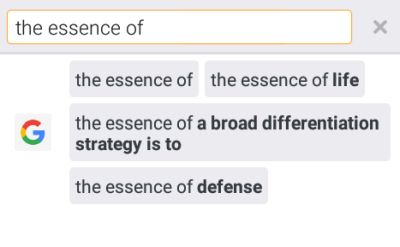