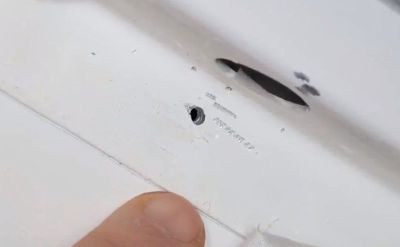 What did your prospect do when a hole first appeared in their hull?

This week the Russian Soyuz spaceship, happily docked on their side of the International Space Station, sprang a leak.

Or so they thought when oxygen pressure levels dropped.

The initial theory that a tiny piece of meteoroid rock hurtled on by causing the damage was swiftly dismissed.

As Nasa’s quickly deleted pic above shows, the small round gap and accompanying scrape looks a decidedly unnatural phenomena.

“Done by a faltering hand”, “a technological error by a specialist”, “either on Earth or in space”.

Whatever the reasoning, a fix was clearly a priority.

But what of its permanence?

The vessel is nearing retirement. Spacewalks are risky. Sending a whole new panel and toolkit expensive and slow.

Yet you cannot have three people starved of breath.

There is a conundrum similar to this for many a solution pitch.

Yet sometimes they hope to merely brush it under the carpet.

The problem more contained, than eradicated.

They may well be joyful you can remove sight of the problem in the immediate aftermath of signing up.

But what about ensuring that it does not re-emerge? Whether in similar clothing or in disguise.

This is a frequent hurdle for such as Services.

This coin’s other side is that many a solution sale capitalises on never quite fixing something. An area Services sellers conversely exploit.

It pays to know in which pan of the scales your prospect sits.

In the orbiters case – and who couldn’t help but think of the iconic Apollo 13 scene putting a square peg in a round hole for their filter malfunction – the instant remedy was a classic.

It’s enough to give every amateur diy-er hope.

Astronauts covered the opening with some Kapton tape, an adhesive film that remains sticky in extreme temperatures, as a temporary fix.

Mission control chose to move up a stage;

Later in the day, the Russian cosmonauts plugged the hole with sealant and gauze.

Then relaxed that this was enough. As this later snap points to; 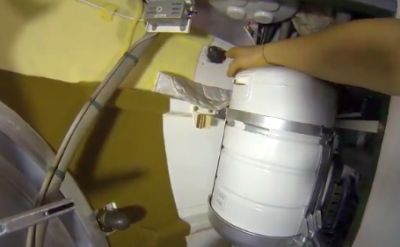 You hear phrases akin to this from solution buying regularly.

Nobody really wants to crew and fuel a whole new rocket. Then again, most realise the folly of taping up a quick cover.

How are you encouraging your prospects to go beyond the 1960s Kapton job?