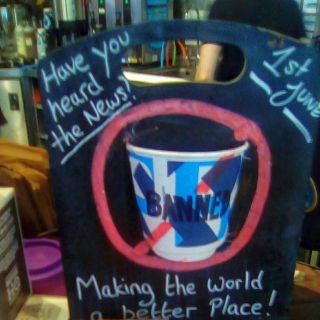 So I was in a fast-growing chain of English Midland-ish coffee shops.

The owner was in this particular branch.

Being video’d in front of the counter.

For on the day in question, a significant – nay, laudable – progression was in motion.

Now, takeaway drinkers had to rather buy a reusable one. Named “ecoffee cups” and in all manner of fluoro shades.

As you’ll see from my snap up top, this transition had been trailed.

The marketing flyer strapline had been; bring, buy, borrow #noexcuse for single use.

As a separate aside, this homemade treatment is a brilliant idea for presenting something that you want your salesteam (or any cosy audience) to avoid. Especially if they’re being fixated on talking about a distracting unmentionable.

I find myself often encouraging sales leaders to buy some craft mounting board and stick all manner of chart and imagery and the like on them to hold up in meetings and leave on display around general office rooms. This 3D vibe is also a winner.

A punter ambled in off the street.

They ordered a coffee to-go.

The barista then ran through the spiel he’d clearly been taught that morning.

Almost a fiver for a cup to keep?

However glad I was to see such an initiative – the waterproofing plastic inner film renders the current outer cardboard style pretty much unrecyclable – the world over such like which often place the onus on the punter, away from the producer, are always doomed.

And so then we entered the next phase of the ‘pitch’. You can have a loaner. For more than the price tag of keeper. Possibly not even the same sexy style either. But you get your money back when you return. If you ever did so.

Straight after, the owner went over to the till.

The server insisted that although that was their first ever time ‘saying it’, they’d get better.

I wasn’t so sure you can rely on that.

And this is the mirror of what happens throughout solution selling with a new product pitch.

I thought on how they’d gone about introducing this fresh idea to their staff.

What meetings or workshops or rehearsals had taken place.

How the pitches in the field were being tracked, monitored, built upon.

What feedback, learning or embedding attempts were in train.

And don’t make the mistake of thinking that ‘it’s only a coffee cup’.

Nearly everyone forgets to plan for what happens once that first pitch is made.

The First Victim Of War is variously described as many things. Truth, Innocence, The Plan. Add your own.

When offering a new product, it is vital you think of what the first victim of that virgin pitch is. As it is highly possible it’ll be you. What are you doing to ensure that does not happen?

A happy ending in the café by the way, is that the next customers, a trio, each bought themselves a new lidded marvel. And yes, the girl went neon pink, and the boys, dayglo blue.