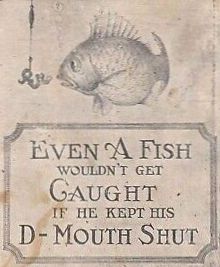 I heard a story about a New York lawyer. Proudly displaying a jokey framed pic behind him, above his desk. A fish with a hook in its mouth, alongside the slogan, ‘if I hadn’t opened my mouth I wouldn’t be here‘.

The pic above, a vintage postcard of similar vibe. Searching springs the specific, alternative slant of a phrase;

even a fish wouldn’t get into trouble if they’d kept their mouth shut.

Attributions mainly range through a variety of twentieth century Indians.

In the terrific book, Bonfire of the Vanities (don’t waste time with the awful re-written movie) a ‘fish’ was an unwitting ‘mark’. Who ended up buying the entire night’s after-work drinks for a bunch of daily dipso scroungers.

To “hook ’em” is an age-old advertising, marketing and selling term. Yet when hooked, think of how it ends for the fish.

There’s also the meeting steer about the person speaking the least. Often so doing because they are content that behind the scenes, they wield the most influence. Although that isn’t a concrete rule, as well as an opposite. Those spouting profusely tend to be less important. Or are scrambling to try and prove some power ranking.

I’m reminded of the old movie scene gag. When on parade, ‘all those wishing to volunteer take a step forward’. All but one standing in line then take a step back.

The message being not only shut up, but actively move away.

Which brings me to a selling trope of renown.

Once you’ve sold, shut up.

There’s a classic cartoon. A delighted salesperson, freshly signed contract in hand, says to their new customer along the lines of, ‘so glad you bought this, who cares about all the clients saying our service sucks’.

The looming peril of a prospect objection trap duly swerved. Only for their fishing line’s hook failing to catch you replaced by the gigantic net of the onrushing supertrawler disaster.