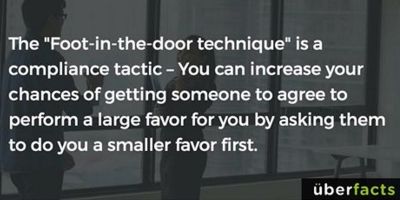 An instagram account with 1.5m followers. A day after this posting, over 21k Likes and 165 commentors had already enjoyed this ‘extremely good’ nugget.

I knew this as the Ben Franklin Effect.

The famed honorary Brummie describes it from when a political adversary didn’t seem to like him or his ideas. So asked if he could borrow from “his library a certain very scarce and curious book” he’d heard he kept. Compliance with this small favour paved the way for a fruitful new relationship.

There’s also the other way ’round. Ask for a large favour you expect to be declined, making your follow-up request for a smaller favour more likely to be accepted.

This one is known as the Door in the Face technique.

The door-in-the-face (DITF) technique is a compliance method commonly studied in social psychology. The persuader attempts to convince the respondent to comply by making a large request that the respondent will most likely turn down, much like a metaphorical slamming of a door in the persuader’s face.

One of my favourite examples of this I came across way way back. In 1993. A young girl achieved a 90pc close rate on two-dollar cookies by first asking for (then pitching for as long as possible), a pair of $95 raffle tickets.

You are supposed to tailor your choice between these two Doors dependent upon your reading of the situation.

Surprisingly, a new book by a journalist who’s studied the patterns of conmen suggest that these two tactics are much beloved of their despicable grifter kind.

Yet the message perhaps is, make sure you ask favours of your prospects…