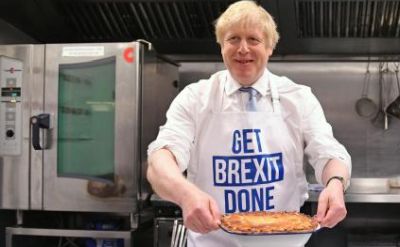 Well. The commentariat seemingly says that was quite “extraordinary”. Another election turn-up in the democratic world, adding to a recently bulging list.

The victorious Party with the (landslide?) margin by which they won today thank their central three word slogan; get brexit done.

UK political campaigns were thought to require more sophistication than that.

Especially as the disaster at the last general election was blamed in large part on the ad nauseam Strong and Stable refrain debacle of the then incumbent. (A “clusterf**k” manifesto social care policy mistake meant replacement with weak and wobbly sustained during the remaining campaign. Hint: any slogan must bear scrutiny).

Surely you cannot ignore a complex set of issues and distil your chosen banner in such way?

One key late-night phone-in host shouted at anyone citing these slogans. Ranting furiously it was driving him mad. Regardless of your personal stance, the fact he never redressed this imbalance, openly dropping any impartiality, remains a disgrace.

Even CNN anchors called it “a very clever slogan”.

I saw the New York Times correspondent say the phrase was hammered home so much it knocked the hacks covering the Leader on the stump “out of their senses “.

Yet it cut-through. Spectacularly.

In fact, the now revered mantra was more nuanced. It was often followed with a sub-slogan; & unleash Britain’s potential. Which then also allowed a brief riff on public sector, infrastructure and other feel-good promises.

I wonder how useful a pitch, slide or meeting point that follows this upfront lead might be?

Get [insert noun of choice] Done

The aftermath postmortems even see broadcasters ask their audience for their own answers. Ranging from paperwork, tax-returns, outside tap to clean their dog, the surname of their football team’s failing manager and inevitability perhaps, Christmas.

… worth a shot over the next couple of months I’d say.