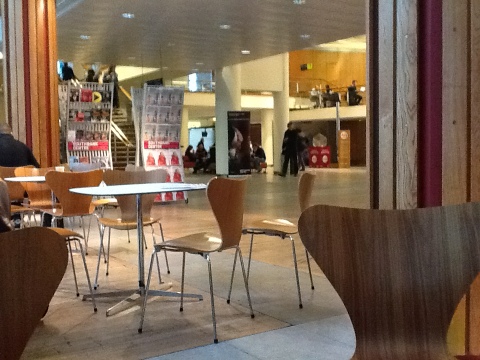 Well here’s a funny thing. I was keeping myself to myself in a public wifi spot in London. Tablet in hand, I looked jaded, caught between two far off time zones just before flying farther west. Then two people came up to me with a load of professional looking AV kit.

Turns out they were from a company with a technical bias. They wanted to know more about how people used tablets.

They got frustrated in their office that colleagues were happy just to surf the web and read articles on it. Instead, they got out and talked to real people.

That day I was their seventh interviewee, with more to come as they hopped onto a bus. No-one had been rude, nor refused their request. They were polite, and simply asked, “have you got two minutes please to talk about your iPad?” Throughout they were engaging, asked good follow up questions, and never wanted my name or company details. The local chap had just flown back from a snowy Philadelphia, and his antipodean lady partner in crime from LA, which also allowed a pleasant exchange about geeks taking over the world.

Incidentally, their seven recorded chats (wisely only voice recorded with still pics to avoid any potential YouTube issues!) took just two and a half hours.

I asked if their aims were being met, and they were pleased that they indeed were.

What a great lesson this pair of researchers gave.

Forget the obvious marketing department parallels at your own firm.

Think rather about how you could get out and about in that major customer of yours. Or better still, at your year’s key prospect.

You don’t have to be pushing your own wares in the slightest. Consider all those items they use, or concepts they must deal with. How do they react to them? Where do they think they’re going, a year or two from now? How are their expectations measuring up? Asking about general market or environment issues can easily uncover their real values, and maybe desires, and all you need to do is get into their canteen. Get in touch with your biggest ally right now!