A few years back high streets of the land were chock full of smiling students accosting their prey. That week, I’d seen the Greenpeace campaign against Lego. Their crime was not focused on ubiquitous tiny plastic bricks. It was that they’d gone into a partnership with Shell. Evil, bad, dastardly carboniser Big Oil at its most heinous. How dare they.

I remember at the time thinking how clever their video was. With sludges of crude laying waste a miniature town of lego bricked utopia. But I feared they were missing the point. As they so often do. They make it difficult for many of us who have empathy with their cause to embrace them.

One lunchtime that week, a chugger stopped me in a busy English town centre. “Heard of Greenpeace?” she smile-shouted, as she obstructed my busy way. “Yes,” I wistfully replied, “and I’ve heard of Lego too” and continued on my canter.

I want the planet to be healthy. Yet for all the wizardry making ourselves ‘greener’, I fear our only hope lies in a system reboot which – and critically not one promoted from the hard Left – has at its core the balancing of our homo sapien population.

One person atop a globally reaching corporation (or government) can achieve exponentially more on this than all the hundreds, thousands, millions housed within acting individually.

There is one toxin we can help eradicate. Plastic waste. And Greenpeace this week have a video ad on this from which my feeds have no escape.

Images of marine life dying through entanglement with this detritus of our consumerism are heartbreaking. Single-use plastic is a scourge about which we can all make a difference by playing our small part. From straws to coffee cups to clingfilm, the list of enemies is long.

So it is to applaud the activists for keeping the pressure on chief culprits, the supermarkets, and imploring unnecessary plastic packaging to cease.

A trio of stills from their video up top shows how they pitch their worthy policy.

Simple pictures. Plenty from supermarket shelves and tills showing limitless plastic wrappers. Then plenty more from the sea. Including ocean-filled shots where all you can see are floating shards of discarded plastic sheeting and ending with, cue the tears, a bird on a beach with plastic in its beak.

When screengrabbed, the simplicity shines. Even a mundane shot of the inside of a shop can be lifted with their type, “UK supermarkets produce 800,000 tonnes” of plastic packaging. The huge number happily highlighted in their trademark green.

Most imagery needs no caption. When it is called for, it is brief and to the point. Are your slides in the same vein? 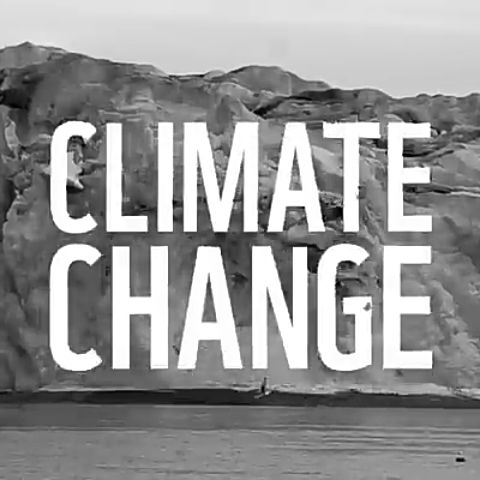