Who needs oodles of charisma to present, when what you’re presenting about is the topic with perhaps most charisma oodling out of it on the planet, or in this case, off it?

It’s by a man on a mission to Mars.

Regardless of subject matter, my aim here is to understand best-practice presenting through this keynote slot.

Let’s get the difficult out the way upfront.

Elon Musk is a terrible presenter.

He stutters, mumbles, pauses inopportunely, is mainly monotone, without expressive flourish and statuesque.

A masterclass in delivery this is not.

Then there is structure.

I found myself wondering what marks an eleven-year old would get if this was their essay.

There’s no overt mystery set. No ‘three act’ ride mapped out. No summaries. Just lists. Flaws that even the delicious slides on offer (more of which later) cannot mask.

The purpose is laid out with understatement. Not necessarily a bad thing. But when then followed with a lacklustre ‘how it’ll be paid for’ section it fell short. Forty minutes later, we’ve gone through chronological diarising of plans. Eventually, the finale. If you’re still awake. An animated short. Showing how the self-same rocket tech that’ll get us to the red planet will fly passengers anywhere on the globe in under half-hour.

Yet this is a prez worth watching.

Although possibly not for the jokes. Humour is sparse (often the right path). Meaning laughs may well get amplified. The first gag wasn’t great. The codename for his major dream is BFR. The B standing for Big, the R Rocket, and you can guess the F for yourself. (Although codenames for projects are indeed a winner and should be a solution selling staple.)

The next examines how they thought of paying for the venture.; “Kickstarter, collecting underpants – they didn’t pan out”.

Then a more visual gag about testing a fuel tank until full capability. Or as the pic showed, until exploded.

Laughs and mostly applause greeted his ambition for “Moon Base Alpha”; “it’s 2017 now, we should have a lunar base by now, what’s going on?”

His first Cargo Mission slide stated the date of 2022. His cheeky underlining; “That’s not a typo. Although it is aspirational.”

Then a closing gag after showing the promo vid of his orbiting aeroplane killer. A pic randomly appeared of a mountain. To which he shrugged, “mountain”. 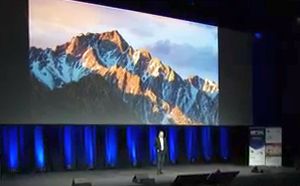 That was actually half-decent.

There were other notable lines:

The description of “key elements” when running through main rocket problems to overcome for a Martian journey.

Nine years to the day beforehand, they’d tried their fourth rocket launch. The previous three had all failed. This was their last money. It was all or nothing. The last shot. Yet it finally worked.

The time taken to get to Mars. Anywhere between three and six months; “…some number of months, single digit months”.

The analogy used to explain how rocket re-usability was both crucial and his edge: It costs $1½-2m to build a single engine aircraft. Yet only $½m to charter a 747 for the return trip between California and Australia. With added emphasis on the importance of this re-use concept, being their “profound – wouldn’t call it breakthrough but – realisation”.

Then commenting, greeted with great applause, on his timescales; “five years seems like a long time to me”.

Before finally stating on that short video his 27,000kmh happy by-product back here on Earth; 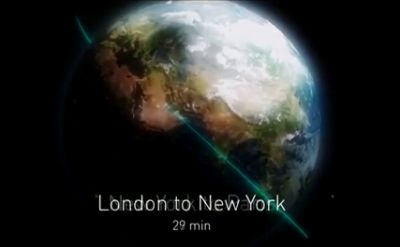 Lastly, I must mention the actual slides. The talent behind them cost a fortune no doubt.

There were a number of ‘wow’ moments. Seeing a rocket land back on its launch pad alone is an amazing site. One now no longer the sole preserve of scifi movies.

Yet in the main, it is the slides we can replicate that interest. A key lesson being, who needs colour?

This ‘top trumps card’ being from the ‘grey’ theme; 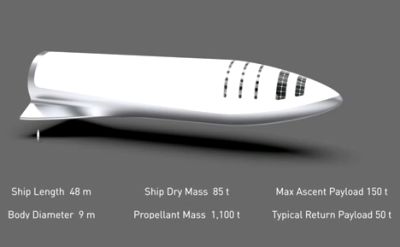 And possibly the roundest applause, for the reveal of ‘launch costs’, which reversed this slide’s ordering of ‘rocket capability’ so that the BFR is positioned as the clear winner in (pretty much) black and white; 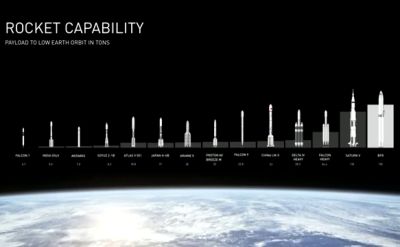