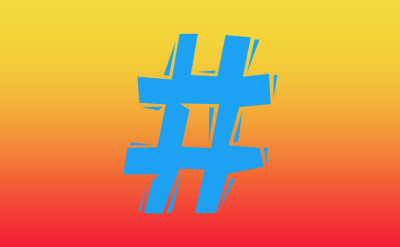 A flutter of writers this week herald the tenth anniversary of click-age label, the hashtag. Make you feel old?

I remember when it arrived. Now Playing being one of the first I recall, which today is naturally shortened to #np.

My main joy in this celebration is twofold. Firstly, the ever-so-clever inventors of the platform which saw it begin – Twitter – didn’t much care for the concept. To such an extent that users carried on regardless before eventually the developers caught up. Customers. Who needs ’em and their pesky ideas.

Second, the roll of dishonour for the biggest hashtag #fail. From a Susan Boyle album launch to literary festivals. Abbreviations, underscore absence, neglected initial caps all combine to ‘hash-up‘ the unsuspecting from within their comfy corporate towers to the most well-meaning community endeavour.

There’s a legion of articles on lessons to learn from such misfiring hashtags. Which made me think about our solution selling angle.

The obvious route is to conjure one for our latest deal or product. Most brands have long stopped simply using their new gizmo name as the hastag. #iphoneX might work for some, but in the main this has been replaced by the uplifting slogan. Yet these are equally as troublesome. From co-opting a long-established line or inventing a mantra (adidas and Stella saw global retail examples in ’16) the supposed big boys come across as either lazy or waffling. And so would we.

There’s the benefits angle. Also the aspiration angle. But these too may appear conceited or contrived. Can you seriously imagine dropping a cheeky hashtag like save10mill, gainextrahours, guaranteedpromotion, becoming No1 or hitting2dollarsashare? When strangely, it is precisely that which appeals to your ultimate buyer as a personal (and slightly secondary, professional) gain which you ought be hammering.

The wikipedia page on what they title as the ‘number sign‘ has at time of blogging over two dozen alternative names.  I first knew this symbol as both ‘hash’ and ‘gate’. As in the 80s phone keypad, aside the bottom Ø, opposite the star. (An asterisk I see is also called a sextile.) The twitter founder thought on ‘octothorp’. And I note the Malay ‘hex’, as well as similarity to musical ‘sharp’.

These strike me as good to drop into a slide chat around your informal hashtag creation surrounding your bid. For instance, if you were getting rid of a kind of curse, as in say improving an old bottleneck, you could evoke ‘hex’ with hashtag then encapsulate the issue you eradicate. This might help set you apart. (I’m also reminded of the classic Licence to Kill Bond line when asked if he was “a problem solver?’. “I’m more of a problem eliminator”.)

You could echo gate say if your offer can be boiled down to a specific figure that you unleash. As in you’re the gate-way to that amount. Whether it be a percentage, time, reading or best, an actual financial flow.

Or perhaps sharp, as in you’re sharpening future performance in some desired, class-leading manner.

In any case, even to suggest a hashtag in a prospect forum may well lead to that most treasured of outcomes. A genuine conversation leading to collaborative deal building.