Here’s a tv ad revelling in the title ‘fairyconomy‘. The product is a washing-up liquid called Fairy. Inside these thirty seconds of ferocious fmcg pitching is a remarkable “fact”.

“Because the ads focused on the mileage of the products, we considered consumers would understand that the comparison was between the longevity of the Fairy product and that of the Persil product. Furthermore, we considered the images made clear that a standard 433 ml bottle of Fairy lasted as long as two standard 500 ml bottles of Persil.”

Does this really mean that one, single bottle of this brand can do the same amount of washing as two bottles of its closest competitor? 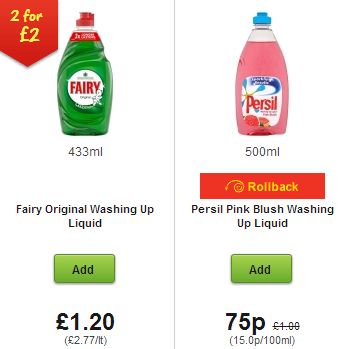 When I saw this (some months after the ad first aired) I checked England’s online supermarkets for then present day price comparisons. The screengrab above is typical. Both products here have some kind of point-of-sale incentive in play. (The Persil brand was offered at the same price point across their other flavours, Orange Crush & Lemon Burst, on the full listing).

It garnered plenty of press. Even more so after the ruling gave impetus to their campaign. To quote the Daily Mail, it “really does last twice as long as rival brands“; 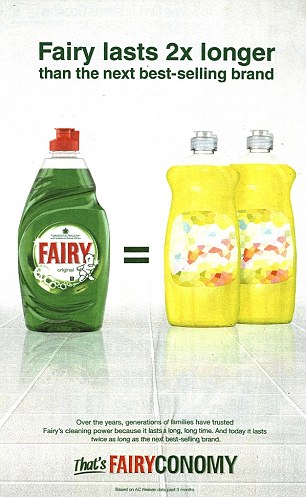 The viewer is left to form their own inferences…”same amount of product used for Fairy and competition“; 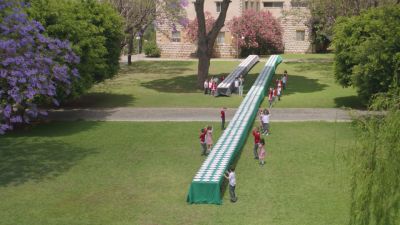 Anyone that has to justify price in comparison can build on tactics here.

The first is the name. The way the sound ‘economy’ fits so snugly as a suffix is a delight.

If your company or brand name ends in practically any vowel-like sound you too could do this. Indeed, hashtag [yourname]-conomy could be your sales emblem.

If any spelling related to you ends with an -n, then you could even use the ‘-onomics‘ vibe as opposed to the ‘c’ pivot.

Then there’s the prime visual.

All those extra plates. Gleaming in your direction.

And what about the cheeky use of perspective to make the plates on the right look even greater in number?

What imagery packs the same punch in your world?

Even if you can’t ‘show’ it, there may well still be an ample mental image to conjure in the prospect’s mind.

Are there less hours in the day people need to devote to operating with you? Fewer sheer numbers of personnel required? Less cash spent on upkeep?

You don’t need to show you’re double the money, just that you give more ‘mileage’ too.