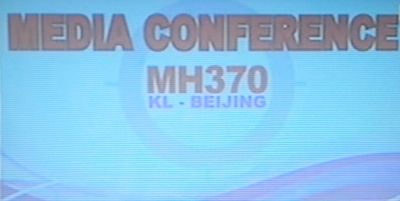 The tragedy of Malaysian Airlines flight 370. Understandably blanket media coverage across the globe. Each day over three weeks of frantic searching the acting minister of transport has walked into his press conference theatre in KL.

This old school projection screen slide behind his podium.

For many years broadcasters have latched on to the importance of what’s behind the talking head. From grid of sponsor logos surrounding a sportstar, to beaming faces of happy voters staring through the back of a politician’s head, image is everything.

It provides vital context. Something is always being promoted.

Whether it’s the overt prominence of a retail brand, or the desirable characteristics of the person speaking that we must ‘buy’.

When I first saw the Malay backdrop, I instantly thought they’d missed a significant trick.

I understand there are cultural and moral sensitivities. But even so, the blandness of their slide irked me.

When they eventually moved to a bigger venue, I immediately thought the answer would be to have something paying respect to the traumatised families.

My own initial idea revolved around a kind of photo-based montage. Maybe using similar kinds of image to those shown worldwide as the pilots pass through airport security. Surely the departure lounge also had cctv and an apt still available? Or would that in Asia be deemed inappropriate? How could you feel in their shoes? 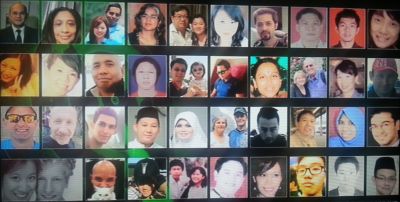 I guess one issue here is that all 239 lost souls aren’t featured.

When transitioning between images, they also used an animated plane. 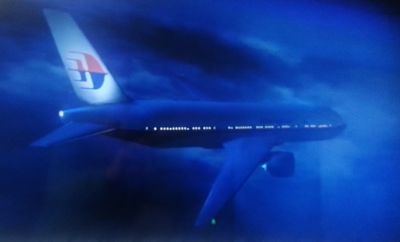 Probably not the right vibe for back in KL.

Yet other stark images emerged. From the the ‘hope springs eternal’ chalk art on the Manila runway to the impassioned tribute walls across the region.

In any case, the press briefing was not about the local government. 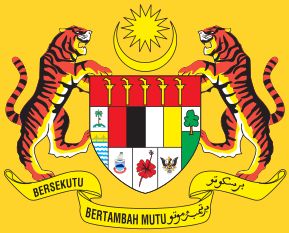 So even worse, what my telly screen pic doesn’t show is at the top, above the capital letters for media conference, was a logo. The coat of arms of officialdom. Why should your logo ever appear on any slide of yours at all?

They are supposedly about finding the passengers and crew. The main speaker kept saying they were “steadfast” and would “never give up”. The backdrop would have done well to show what was constantly in their thoughts. The authorities there have taken plenty of flack, so  I am certain that a heartfelt backdrop could have helped in some small way to show who’s side they were truly on.

When you present (or run any kind of forum for that matter) your backdrop is a selling tool.

Are you using it?

What is your final slide? Whether it signifies your talking will now cease, summarises your marvellous pitch or heralds the round table discussion?

When left up, what impression does it make? Subliminal or otherwise…

Perhaps you ought construct a specific slide here? One deliberately designed to be up during the aftermath. For display when the crucial post-presentation discussion kicks in. It could even just show an image rather than words. Which at the very least hints at why your audience would do well to heed your words. Preferably one that pictures them, not you.

Every speaker has something to convey. Make sure you use every tool you can to help it sink in.