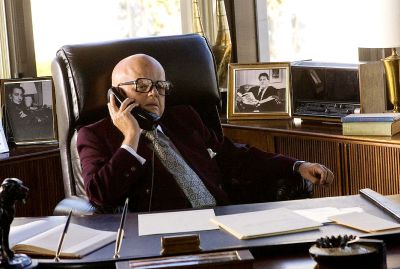 Neither being American, nor like my generation in general understanding the supposed charm of David Frost, I long passed up the chance to watch the 2008 Frost/Nixon big screen stage adaptation.

Two more wasted hours it was tricky to envisage.

The combination of the eulogies offered to the interviewer and untrammelled torment of long haul travel trashed my resistance this past week.

Literary agent Swifty Lazar is the 1977 interview set up go-between (I thoroughly enjoyed this long ’93 New Yorker piece on him). Plateaued English talk show host Frost is desperate to snare the only interview with disgraced US President, Nixon.

During this process, he has one wonderful solo piece to camera. He describes how he uncovers the relative strength felt by his adversary in a negotiation.

He phones them late at night or on weekends.

If they speak to him, he knows they’re feeling the pressure.

And he has the upper hand.

Cut to Frost roused in the dead of night Sydney-time as Lazar revels in Californian sunshine the other end of the line.

As he chuckles to himself, you are led to infer this tactic helped secure around a twenty percent uplift on the fee.

It did strike me at the time, that this can work both ways. After all, if you’re in the same time zone where small hours are shared, as the call’s instigator, aren’t you the one showing yourself up as worried?

In any case, the out-of-hours tactic is indeed a tried and trusted one.

In today’s climes, where a smartphone is practically a fifth limb, people are forever contactable. If they want to talk, they will. Anytime.

Seldom will a message go unreturned, regardless of when it’s left, if the other party feels under pressure to make a deal. It’s when they don’t pick up or get back to you the fun and games start.

One tactic I did pick up long ago, is never to fall into the salesy trap of apologising for calling at a potentially weird time.

In the movie, Lazar asks Frost if he’s good to talk. In the background you can just hear the groan of his female companion annoyed at being woken. Frost say’s he fine to speak. Lazar’s smile beams.

That’s alright. Saying, ‘sorry for the lateness of the call but…’ is not alright.