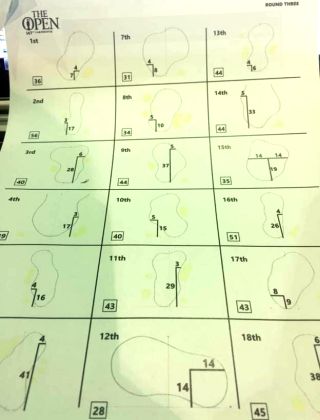 The days I lost to the game in my youth now feel tales of legend. Or folly. If only I could remember which.

Most people are probably familiar with what a course guide looks like.

The yardages and hazards of each hole mapped out. Helping amateur and pro alike select the right club as they aim for the hole. Once there, you see the gradients and slopes of each putting surface too.

This photo above was widely shared online from the current major taking place at Scotland’s once brutal Carnoustie.

It shows the precise locations of Saturday’s third round pin positions on each green.

I’m not sure what the figure in each box is though. It doesn’t look like speed, as the amounts are higher than I recall them able to be when using the traditional stimpmeter.

My selling thought triggered here, is that too few of us take time to actually map out our destinations.

Draw chart for where we need to be making an impact.

Yes, there’s often an org chart (aka organogram) upon which we can scribble. But do we?

And even better, what about the invisible connections. The lines of influence and comradeship that are not included on the ‘official’ job role ladders that sit outside the remit of traditional organisation design diagrams. Which, by the way, can be out of date in any case.

Early in my career I once got ribbed by elder colleagues for having flipcharts next to my desk and drawing up such diagrams of my own. “Got the crayons out again?” would be the dismissive aside. Comparing me to a toddler at school. Attitudes change when you then hit numbers…

Deal mapping is quite a thing today. The onslaught of solution selling ‘systems’ leads to recommendations to do this. Yet how many do?

Even at the most basic level, a good old 2×2 with axes of Influencer/Decider where you plot according to affection for your plans can take you a long way towards manoeuvring opinions and actions your way.

Then you can play the course properly. Who wants to hit and hope?