…the marketing slogan for the introduction of what was trumpeted as;

the most secure coin in the world.

Referring to the dodecagon which is the freshly minted one pound sterling.

The drumrolling around this launch certainly enriches the general solution sales pitch.

The previous round £1 was victim to significant forgery. One in thirty found to be fake.

As designers warned, “A forger only needs to pass off a coin once”.

So the new coin has a number of features that make it much more difficult to counterfeit.

They know their reason for updating. Security. So they go large on it.

Here’s the text followed by pic of their official six improvements for criminal replication defence;

12-sided – its distinctive shape makes it instantly recognisable, even by touch.

Latent image – it has an image like a hologram that changes from a ‘£’ symbol to the number ‘1’ when the coin is seen from different angles.

Micro-lettering – it has very small lettering on the lower inside rim on both sides of the coin. One pound on the obverse “heads” side and the year of production on the reverse “tails” side, for example 2016 or 2017.

Milled edges – it has grooves on alternate sides. 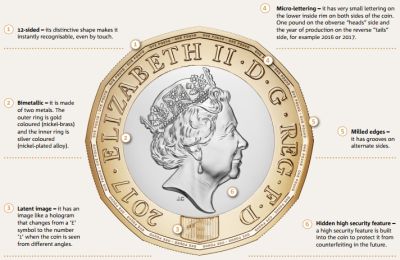 You don’t need to sell security products to stand on this new coin’s publicity shoulders.

Your product must surely give some kind of added security to buyers in its own way.

What can your eventual client be safe in the knowledge of?

The planet’s newly styled ‘most secure coin’ has six such traits. What are yours?

Don’t get too hung up here in the ‘benefit’ categorisation of how you describe them.

There has to be a core reason behind your upgraded wares.

Home in on it. Break it down into the newness that underpins it. Make it your pitch focus. Find those attracted. Be quids in.